Sloth bears may be cute, but you don't want to be the victim of a sloth bear attack. Apparently, they are very deadly.

Sure, they’re cute. Until they decide to eat you.

A sloth bear killed a man and woman in India before feasting on their remains for hours. On their way home from Khermai temple, Mukesh Rai and his wife Gudiya, aged 43 and 39 respectively, were walking through a forest in Panna, when they encountered a sloth bear.😢😬”Horrible!” pic.twitter.com/tTiWMns3S2

The sloth bear was very hungry.

The attack happened at approximately 6:30 a.m. less than a mile away from their home.

The Times of India has reported that the bear “tore their bodies apart,” and proceeded to devour their remains for at least four hours before the police and forest department arrived.

Sloth bear attacks are not uncommon in India. According to Newsweek, sloth bears are very aggressive when around humans, likely because they view us as predators.

No. Bear attacks are very rare. In America, bear attacks only happen in specific parts of the world and during particular times.

You are more likely to be struck by lightning than killed by a bear in Yellowstone Park.

There have been less than 100 fatal bear attacks in America over the last 120 years. 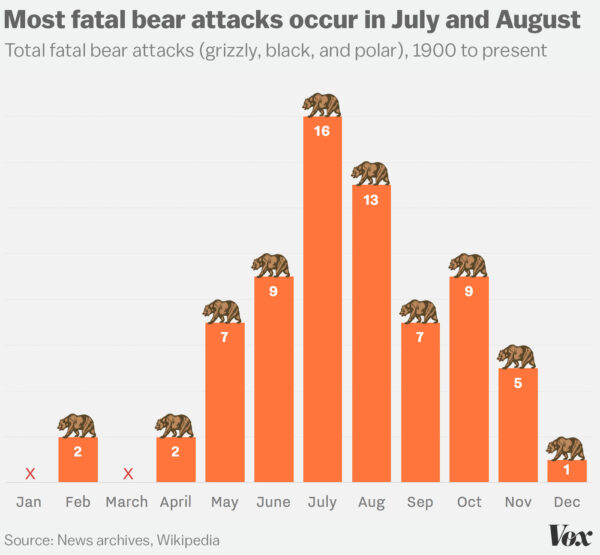 So should you be worried about bears? Maybe when it comes to stealing your food or wrecking a campsite. But most of the time, bears do not want to be bothered and will keep to themselves. Bears will most often attack when you encroach on their territory or are too close to their young.

Bottom Line: you are probably safe from bear attacks. But what happens when a bear gets near you? SCREAM REALLY LOUD!

What do you do if you see a black bear?? If a bear is too close or approaching you, don’t panic! Yell loudly and aggressively to scare it away. If the bear is not approaching you or in undeveloped area, keep 50 years or more away.

It is a classic “they’re more afraid of you than you are of them” situation. But, to be safe, avoid bears at all costs.

Pandas Are Cool Though

One bear you’ll never have to worry about? Pandas. They are the laziest, dumbest, most unmotivated “carnivore” on the planet. They don’t even eat bugs. They only eat bamboo, which is so low in nutrients that they have to sit around eating all day to have enough energy to maybe move around for the one week a year they’re in heat.