Great news, wrestling fans,  Heels is coming back for Season 2! The hit show premiered to rave reviews this year. Star and producer Stephen Amell made the announcement on Twitter.

I want my belt back. pic.twitter.com/T9KqoJgEmJ

The drama deals with the Spade family, a Georgia-based wrestling promotion trying to make it in the big time. Heels has drawn praise from wrestling fans for its use of real wrestlers and its accurate depiction of the independent wrestling business.

I haven’t watched the show (too busy watching real fake wrestling) but all of the buzz has been extremely positive and I am sure I will binge it between now and the season 2 premiere.

Wrestling is so often misunderstood by the mainstream media so I am glad that there is finally a drama that takes this sport and art form we all know and love so much as seriously as those who participate in it.

I firmly believe that wrestlers make some of the best actors. Think of all the skills you need.

You have to be quick on your feet, quick-witted, memorize and practice complicated moves and sequences, and of course, there is the ACTING like someone is beating the crap out of you when they really aren’t.

Despite wrestlers getting a bad rap as bad actors, there are plenty of pro wrestlers who made it big on the big screen. Batista, Cena, and The Rock of course but Cody Rhodes and CM Punk are both solid actors who have branched out to scripted showbusiness.

Related: John Cena Responds Kindly To Dave Bautista’s Lack Of Interest In Starring In Movies Alongside Him Or Dwayne “The Rock” Johnson

Even Sasha Banks, who many think could improve on the mic, was great on the second season of The Mandalorian.

Part of the cred with Heels comes from their use of actual wrestlers, here are just a few who have been in the ring on Starz. 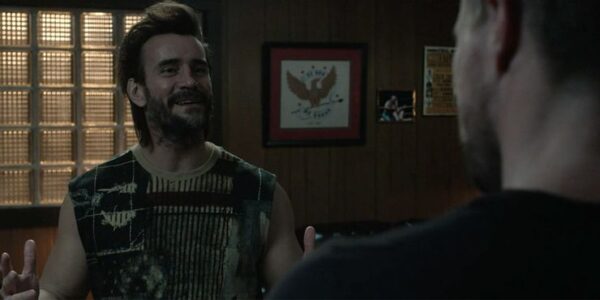 CZW is apart of the ‘Heels’ universe, Sick Nick Mondo will be in it. 😢 pic.twitter.com/YPUTItaVt2

Head Over Heels
Luke Hawx brings real-life experience in the ring to the set of a sibling drama.
By CURT SCHLEIERhttps://t.co/JyQH1r0URb pic.twitter.com/VWLwmpKIe0

Amell doesn’t just play a wrestler, he was one.

A friend of Cody Rhodes, the Arrow star has wrestled three matches on the big time in three separate promotions. His first was teaming with Neville vs Rhodes (as Stardust) and King Barrett at SummerSlam.

He wrestled The Fallen Angels Christopher Daniels at AEW All In.

That wasn’t his first match against Daniels, he teamed with Bullet Club to take on Daniels and Kazarian in Ring Of Honor.

Did you watch Heels? Let us know your thoughts on the show in the comment section below.