Noting that the flag’s “design shifted frequently until the early 1900s.”  the newspaper asked:

What if it were redesigned today? We asked artists and graphic designers to try,”

From the “Snap Out Of It, America” series: design thinking for Old Glory. Our flag design shifted frequently until the early 1900s. What if it were redesigned today? Some concepts represent a possible U.S., others how the artist sees the country now. https://t.co/1wBegbNk5t pic.twitter.com/sHdhTGlzei

The above example is meant to symbolize America’s past, present, and future. But the “symbolism” is so abstract and non-existent that the creator needed to over-explain what each stripe and square meant.

The “stripes”  symbolize “Fear, Forgiveness, Anger, Joy, and Pride” while the blue represents “untapped potential,” yellow is “repairing systemic racism,” and green is “taking care of our planet.” I have to say, none that makes a bit of sense.

To me, this seems like a flag expressly designed to divide America, not unite it.

These are all completely terrible https://t.co/MDCcgE3NIe

More than happy to wave the same flag as these patriots, tbh pic.twitter.com/WlTs7vjO1O

Congratulations to the @nytimes for writing the stupidest op-ed (if writing is the right word for this) of all time. (And this is quite a feat considering the vast landscape of stupidity coming from the @nytopinion page.) Bravo! You’ve outdone yourselves. https://t.co/xqKknMGtV7

All of these designs are awful. Seriously, one of them is just a picture of the flag made BLURRY.

I guess I’ll need my contacts in to make sure I can see the flag now? Come on. But the one below, designed by Hank Willis Thomas, is the worst. He wanted to combine all of the following flags.

“Lift Every Voice and Sing” Black lives matter, Don’t tread on me, In God we trust, A thin blue line, Under God, our indicator, Keep America great, Progress pride”

Into one headache-inducing mess. 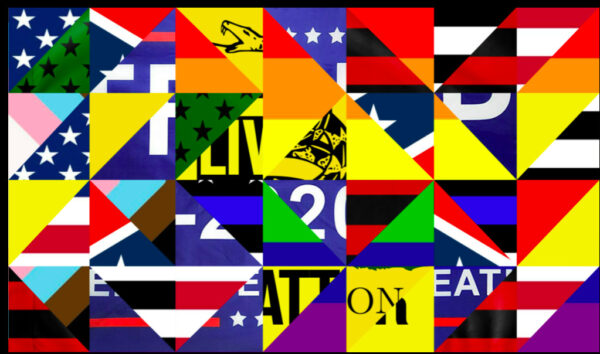 Does The American Flag Need To Be Redesigned?

No. There is no reason for us to redesign our flag, save adding a new state.

These flags are all not only terribly designed, but none of them accurately portray American’s story.

From the blurry design to making the flag a “quilt,” these suggestions are at best lazy and at worst made to embarrass.

Let’s keep our flag the way it is. Our flag is not just a symbol of America but a symbol of hope and perseverance.

When people from around the world protest tyranny, they use our flag as a symbol of freedom:

Demonstrations have shutdown the city’s airport for a second consecutive day and put the entire Chinese city on edge. pic.twitter.com/ZrYE5DzZYU

Johnny Cash Reminds Of What The Flag Stands For

What are your thoughts on these new flags? Share your comments below.