Reports have surfaced that Mustafa Ali has been working injured since December 2020. Meanwhile, it seems NXT's Ridge Holland is on the mend.

Fans could feel it coming, and at WWE’s Fastlane, Retribution finally disbanded. What was the real reason behind this creative decision? Mustafa Ali was working injured. Details, below.

According to a report by Wrestling Inc., Mustafa Ali had been working injured since last year. He tore his PCL during the December 28th edition of Monday Night RAW. That night, he was wrestling against Ricochet.

While Ali would win the match and then berate Ricochet, he probably was in some pain. It was noted that Mustafa decided to work through his injury.

During this year’s Royal Rumble match, Ali’s leg locked right after he hit the squared circle. He’d continue and finish his segment, which lasted for 13 minutes. He even eliminated Xavier Woods, with no issues. Mustafa went for an MRI the day after and was informed that he needed surgery and rehab for his torn PCL.

The report added that shortly after his diagnosis, Ali started to dig into Retribution members on TV. An idea was pitched that if Mustafa could work through the injury and keep things going, there would be a major disbanding of the faction come WrestleMania 37.

Mustafa decided to work through it. He has been working injured to ensure the other group members hand a proper send-off on the Grandest Stage of Them All. However, it seems the WWE decided to call things quits a little earlier by doing it at Fastlane, instead.

As one WWE superstar heads on the injured list, another one is working hard to get their name off it.

NXT’s Ridge Holland On The Mend

There were some major plans for Ridge Holland when he hit NXT in 2020. Sadly, he suffered an injury to his leg in October of that year, during a post-match fight with Oney Lorcan. 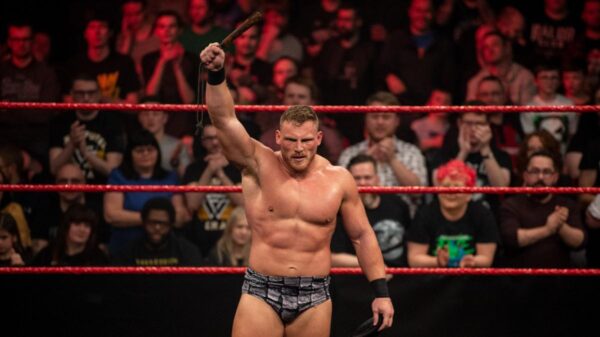 While Holland defeated Danny Burch, Lorcan decided to stand up for his partner. He dove into Holland, and Ridge’s ankle buckled.

On The Road To Recovery

As per a Fightful Select report, Holland has been there the last few months, working hard to get better. While he’s nowhere near an in-ring return, he’s doing his best to move forward.

Before this injury, Ridge Holland was set for a major push in NXT. He was linked to a storyline that involved Adam Cole, where he broke his leg on live TV in a weird accident.

At the age of 32, Holland’s career with NXT is far from over. It will take a while for him to get back to in-ring action, but looks like he’s up for the task.

Holland signed with the WWE in 2018. He debuted in August of that year and lost in a match against Keith Lee. In late 2019, Holland entered the NXT UK brand, and would eventually make his way to NXT (once again) in August 2020. At that point in time, he took part in a triple threat match against Damian Priest and Oney Lorcan.

On behalf of everyone here at WNZ, we wish Ridge Holland a speedy recovery!

Nikki Bella Thanks John Cena, Mike Tyson Back To AEW