Larry King may have gotten revenge on his wife Shawn for a sordid affair with their son's Little League coach by writing her out of his will.

Larry King’s handwritten will cutting his widow Shawn out of getting a payday from his estate blindsided her. Apparently, the CNN anchor did it as retribution for his wife having an affair with their son’s little league baseball coach.

It’s not surprising the Kings had marital problems. Larry was a serial husband.

Over his lifetime he walked down the aisle eight times with seven different women.

His marriage to Shawn was by far the longest reaching well past 20 years. In 1997, just days before Larry was scheduled for surgery to clear a blocked blood vessel, he and Shawn were married in his hospital room.

There was a divorce filing in 2010 that later was shelved when they kissed and made up.

However, Larry King filed a second time in 2019.

The divorce was never finalized and Shawn made it appear things ended on a friendly and loving note when King died.

BACKSTORY: Larry King’s Widow Reveals His Cause Of Death And Final Words To Her

Now, she has been cut out of the will.

Three weeks after filing for divorce Larry hand wrote his will leaving his fortune to his five children, two of whom proceeded him in death a year after this new will was written.

Larry King’s estranged wife: He cut me out of the will!

Shawn now is on the defensive and is contesting the will. 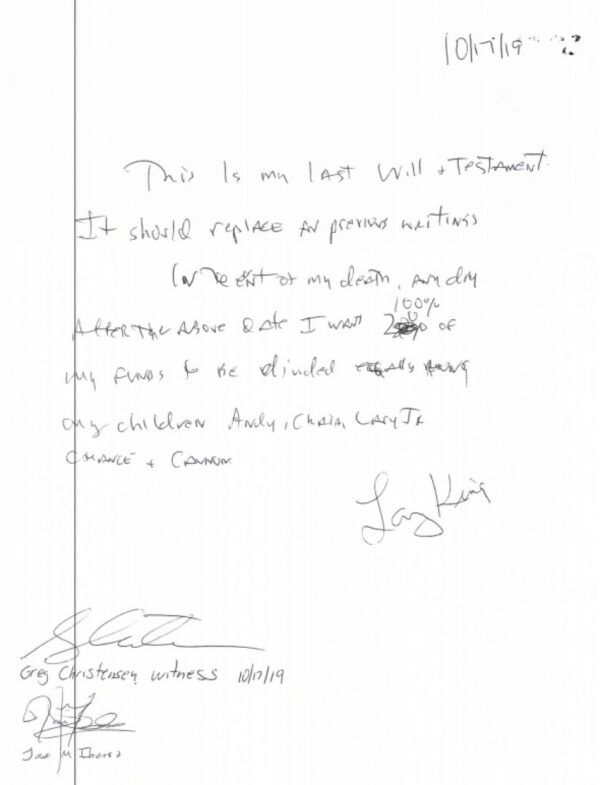 But, by pulling back the curtain, there will be a better understanding of Larry King’s intentions.

In 2016, People and other sources confirmed Shawn had a yearlong affair with British public speaker Richard Greene.

But another affair might be the most prominent motivator for King’s impromptu will.

Shawn also allegedly had an affair with their son’s little league baseball coach. His name is Hector Penate

From the NY Daily News:

A baseball coach is claiming he scored with Larry King’s wife before her divorce filing last week and says she openly mused about the CNN anchor’s demise.

“Yes I did,” Penate, 31, tells “Entertainment Tonight” when asked if he had an affair with Southwick. He said Southwick, 50, often spoke to him of her desire to divorce the 76-year-old King, and wistfully told him, “‘Don’t worry, he’s gonna die soon.'” Penate said he began sleeping with Southwick 2-1/2 weeks after they met in 2007 and described one randy rendezvous.

“We got back in the car and we kind of locked eyes and just started kissing,” Penate says… He claims that he vacationed with Southwick and her children with King in Cabo San Lucas, Mexico, and had sex in King’s bed. “We had sex in Larry’s bed a lot,” he said. “I felt like it was my house.”

It may have been tit for tat with the married couple, so to speak. Larry King is alleged to have had an affair of his own with Shawn’s sister, Shannon Engemann.

It is reported that the CNN anchor even bought his sister-in-law a $160,000 Mercedes Benz.

But, apparently Larry King made the last strike by writing Shawn completely out of his will.

Take a look at this video from Inside Edition that gives more details about Shawn’s contesting the will. She even alleges someone was pressuring Larry to write the new will:

RELATED: Larry King Betrays Widow By Leaving Her Out Of His Handwritten Will