Prince Harry shares intimate details about his life now and before he left the U.K with fellow Brit James Corden as they ride around LA.

While appearing on “The Late Late Show With James Corden” on Thursday night, Prince Harry opened up about leaving the royal family in a way that he never has before. He shares intimate details about his wife, his son, and what their days look like.

Take a look at Harry and Corden as they chat and cruise around Los Angeles in an open bus. Harry admits it’s his first time on a bus.

First Corden suggests they have some snacks and presents Harry with a teacart of goodies. It’s quite funny!

Corden points out various star’s homes and Harry even offers to do “tea on the 405” with his good buddy.

Then, there’s a bit of a mishap and Corden bellows, “Clean it up, Harry!”

The two even take a stroll and Harry sings the tune from “The Fresh Prince of Belair.”

At one point in the interview, Harry talked about the start of his relationship with Meghan.

“We hit it off with each other, and we were just so comfortable in each other’s company,” he said. “Dating me or any member of the royal family is kind of flipped upside down. All the dates become dinners or watching the TV or chatting at home.”

Harry says he and Meghan got to spend a lot of time together.

“We went from zero to 60 in the first two months,” he continued.

We also get to find out what his son’s first words were – “crocodile.”

And, Harry also tells us what Archie likes to have for breakfast. He asks for waffles. And, guess who sent him the waffle maker? Yes, the Queen.

Harry also talked about the Netflix series “The Crown,” which is a fictionalized chronicle of the British royal family.

He took yet another dig at the media by saying that he prefers “The Crown” to tabloids because the Netflix show “does not pretend to be news.”

“It’s fictional. But it’s loosely based on the truth,” Harry said. “Of course it’s not strictly accurate, but it gives you a rough idea about what that lifestyle—the pressures of putting duty and service above family and everything else—what can come from that.”

“I’m way more comfortable with The Crown than I am seeing the stories written about my family, or my wife or myself, because it’s the difference between fiction—take it how you will—and being reported on as fact because you’re supposedly news,” he added. “I have a real issue with that.”

Corden suggests he be cast as Prince William, after Harry suggests Damien Lewis play him. Harry’s response is priceless!

When host James Corden, who is British himself, said that it must have been a tough decision to “walk away” from the royal family, Harry shook his head to say that this was not the case at all.

“It was never walking away, it was stepping back rather than stepping down,” said Harry.

Harry blames the “toxic” media for “destroying” his “mental health” as a royal.

“We all know what the British press can be like and it was destroying my mental health. I was like, ‘This is toxic,'” Harry said of his decision to leave the U.K. “So I did what any husband and any father would do. I was like, ‘I need to get my family out of here.'”

“We never walked away, and as far as I’m concerned, whatever decisions are made on that side, I will never walk away,” Harry said. “I will always be contributing. But my life is public service, so wherever I am in the world, it’s gonna be the same thing.” 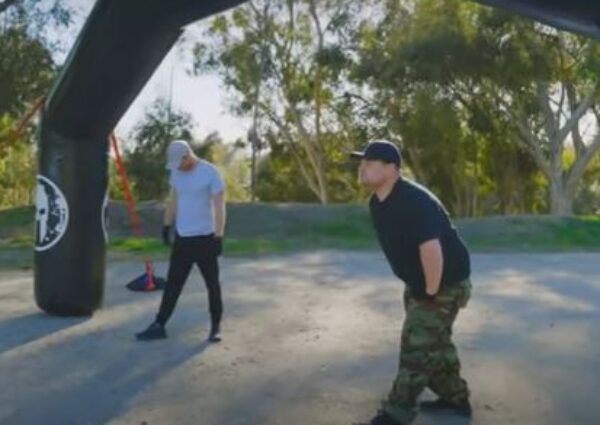 Corden takes Harry to a military style obstacle course to honor Harry’s time in the military. If you’ve only got time to watch part of the video, I highly suggest you watch this part:

It’s truly refreshing to see this relatable side of Harry unencumbered by any agenda. This is the Harry we all once adored.

Just a relaxed Harry being himself.

I imagine the interview Harry and Meghan are doing with Oprah Winfrey will be much different. The royal family might want to buckle up, because it could be a bumpy ride.