An idea was pitched for Bo Dallas & Bray Wyatt to be paired together. See why it didn't unfolded. And, Dax Harwood opens up about his bulimia.

The Wyatt Family almost had a new member in Bo Dallas, but the decision to pair him with Bray Wyatt was nixed. Also, Dax Harwood shared a personal account about weight struggles and bulimia.

Bo Dallas and ‘The Fiend’ Bray Wyatt are brothers, but WWE does not publicly acknowledge their relationship. Therefore, some have wondered about pairing the two together.

Well, when Arn Anderson was still a WWE producer, he did just that. He had a vision where Bray would protect his brother from the Wyatt Family and eventually the stable would grow.

On the Arn podcast, Anderson went into further details about the idea he pitched. It also included Mike Rotunda, who is their father and former WWE producer before being furloughed in 2020.

“I pitched a deal where you brought [Bo Dallas] in with the Wyatts and you told him who he was,” said Anderson. “He was Bray Wyatt’s brother and he was Mike Rotunda’s [IRS] son.”

“And you know, do a deal where, let’s just say that Mike came down during one of Wyatt’s matches in his capacity as a producer was trying to break up a fight.”

“Big Red and Brodie Lee, they dropped Mike and for the first time you had Bray Wyatt, you know, who, other than join in what was going in with the other two Wyatts, he pulled them off and said, ‘Not him, not him.’ Now you’ve found out that he is the son of Mike Rotunda because I don’t think that it was 100 percent everybody knew that.”

“Now you have the Wyatts back off and Bo would be introduced like the babyface other brother. You put him there with that group and you’ve got all these monsters with these foot-long beards, and there you’ve got this babyface who is Bray Wyatt’s legitimate brother.”

“And you know, he’s standing over here, and it would just open up different avenues to give the kid a chance to get started and in the mix with top talent.”

Instead, the Wyatt Family is a thing of the past. Luke Harper (known as Brodie Lee in AEW) sadly passed away and Rowan was released.

Bray is the only member still working for WWE, but he is using the popular Fiend gimmick. He does also have Alexa Bliss by his side.

As for Bo, he has not appeared on WWE TV in a year. He has been spotted backstage, but WWE has not booked him at all. 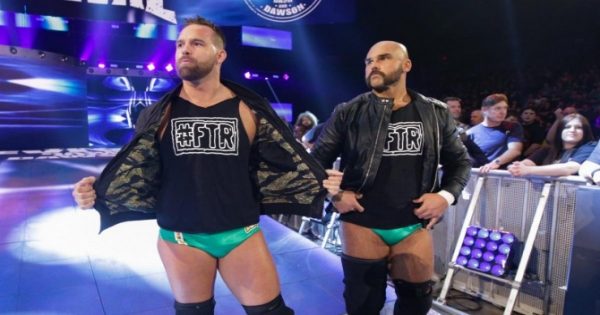 Being a pro wrestler is not an easy job. There is consist work and somewhere between all of that, you have to hit the gym.

For wrestlers, some call the gym their second home. They are usually there six or seven times a week and for hours.

Dax Harwood, of FTR in AEW, disclosed on social medias how he struggled with weight issues for a long time. It got so bad that Harwood eventually began suffering from bulimia.

Eating disorders are not something to joke about. While people might associate them more with women, men also struggle.

By speaking out, Harwood is trying to help others in a similar situation. Besides being a great tag team wrestler, Harwood seems like an honest and stand-up person.

If you have or know anyone who has an eating disorder, do not hesitate to seek help. A quick search on the internet will show plenty of numbers to call or places online to chat.