Over the years, Paige VanZant's fighting career has been scrutinized, and the star recently responded to her detractors.

Paige VanZant has a considerable fan base, but she also has his fair share of critics, and recently ’12 Gauge’ had some words for her “haters”. 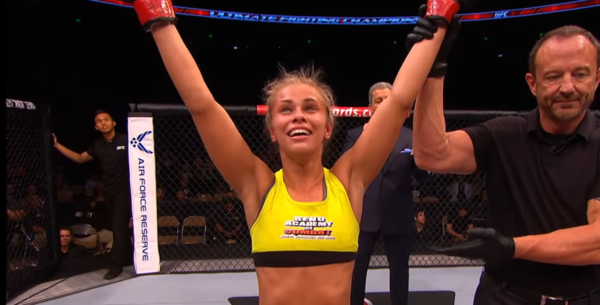 VanZant responds to her “haters”

After VanZant made her way into the UFC in 2014, she quickly put together a considerable following and eventually, she became one of the promotion’s biggest names. But, due to her popularity – she became a mainstream name as well due to a run on ‘Dancing With The Star’s – some questioned the promotional push she received from the UFC.

In other words, some argued that VanZant’s fame, rather than her skills, was why she received big stage fights.

More recently, however, VanZant’s detractors have questioned her decision to move into bare knuckle boxing. After her UFC deal closed out, the fighter signed with BKFC and she’ll face Britain Hart on February 5th.

But, while talking to TMZ Sports recently, the charismatic fighter had this to say about her critics (quotes via MMA Junkie).

“My idea was, if you talk (expletive) about somebody, you should be willing to say that to their face.

And not a single person who has said anything negative about me publicly has been willing to say it to my face, and I’ve seen people in person.”

“All the negativity about ‘Oh! My face!’ Grow up!” she said.

“It’s a face, and it’s mine, and I can do whatever I want with it, and guess what, I’m still going to be beautiful, even if I get cut open. It’s not a big deal. …

That’s so condescending to think of your beauty as being important.”

VanZant could return to MMA

The 26-year-old’s decision to move into bare knuckle boxing surprised a lot of people, given VanZant is a notable draw in MMA. As VanZant approached free agency, the consensus was that she’d likely sign with another big MMA promotion, like Bellator.

But, whiled discussing her future, VanZant also said this.

So that kinda sparked that passion all over the place. So yeah, maybe I will take an MMA fight. I’m strictly focused on the boxing right now, especially for this fight.

That’s all I do. But, maybe. Let’s see. The door is open, so it’s definitely there.”

There you have it. One would think there’s a very good chance we’ll see VanZant competing in MMA bouts again. Regardless of own her run with BKFC goes.