After two previous attempts to have Leon Edwards and Khamzast Chimaev fight fell through, the UFC's rebooked the compellign match-up.

The UFC’s hoping that the third time is indeed a charm, as it’s being reported that Leon Edwards and Khamzast Chimaev have been booked to fight again. 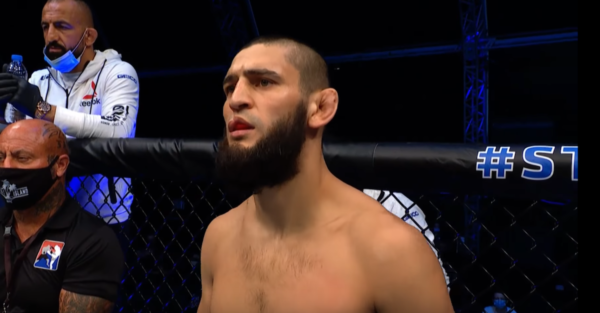 Chimaev was originally tapped to fight Edwards in the main event of the UFC’s December 19th event, but the latter contracted COVID-19 and the fight was postponed.

Then the match-up was supposed to headline the UFC’s January 20th card. But, Chimaev had to withdraw due to lingering complications he had from the coronavirus.

Well, since then, Dana White made it clear he liked the match-up and that the UFC wanted to rebook it. More recently the UFC President has told MMA Junkie that Edwards versus Chimaev will headline the promotion’s March 13 card.

No location or venue has been announced yet for the event.

Chimaev’s toughest test to date in the UFC

Although Edwards wanted to remain on the January 20th card, the fact the UFC opted to stick with this match-up isn’t a surprise. For weeks now, White has said he wants Chimaev to fight a top-ranked fighter in the main event, and this fight does that.

Edwards (18-3) has won eight straight bouts and is currently sitting in the #3 spot of the UFC’s welterweight ranks. During that run ‘Rocky’ has defeated notable fighters like Donald Cerrone, Gunnar Nelson and most recently Rafael dos Anjos.

So, if Chimaev can win, he’ll be in the title shot mix.

Chimaev (9-0) has been fast-tracked into big stage fights on account of going 3-0 so far in the Octagon. In July, he made UFC history by becoming the first fighter in the modern era of MMA to win two bouts in just 10 days.

Then in September, Chimaev knocked out middleweight Gerald Meerschaert in just 17 seconds.