Jon Jones Has “no Intentions” of Ever Returning to Light Heavyweight

As Jon Jones continues to prepare for his heavyweight debut, it looks like 'Bones' has also closed the book on ever fighting at 205 again.

Although Jon Jones vacated the light heavyweight title last year to make a run at heavyweight, speculation about whether we could see him fight at 205 pounds again has never gone away. But, based on comments ‘Bones’ recently made, it sounds like his days fighting at light heavyweight could very well be over. 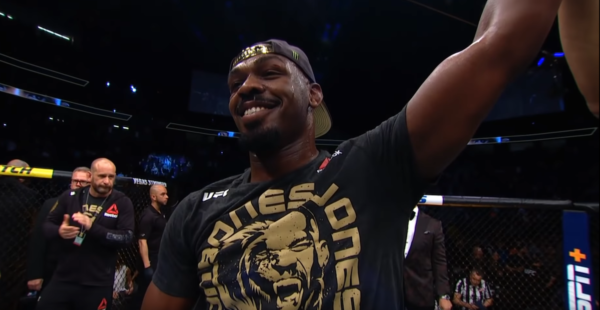 After Jones squeaked by Dominick Reyes last February, the renowned fighter eventually campaigned for a bout with feared heavyweight slugger, Francis Ngannou. A contractual spat ensued, but eventually Jones announced he was dropping the light heavyweight title to make a run at heavyweight.

While Jones has never backtracked from that plan, he has talked about fighting his rival, Israel Adesanya. That prompted many to think Jones might return to 205 pounds at some juncture to face Adesanya, especially if he beats Jan Blachowicz to win the light heavyweight title, March 6th.

But, in a recent interview with Tom Taylor for Bleacher Report, Jones seemed to close the door on making the drop to 205 again.

“The reason why I decided to vacate the light heavyweight belt and not hang onto it is that I knew my move to heavyweight was going to take a really long time,” Jones said.

“I didn’t want to be one of those athletes to slow down the division.

“I thought it was the right thing to do for everyone else,” he added.

“I could have done the selfish thing and held onto it and come up with a bunch of excuses and lied to the fans and said I was going to come back down to light heavyweight and made all these guys wait.

I didn’t want to do that. I have no intentions of ever going back to light heavyweight.”

And, while discussing how his preparation for life fighting at heavyweight has been going, Jones also said this.

I know this motivation and this liveliness I’ve been feeling is going to translate into dominating victories.”

Given that Jones has been packing on muscle and is reportedly around 240 pounds now, it’s not surprising that right now, he doesn’t see a return to light heavyweight.

But, you do have to wonder if that might change down the line, if Adesanya wins the light heavyweight title and defends it a few times.

Or, what if Jones gets taken out by Stipe Miocic or Ngannou in his first bout at heavyweight? Could he decide he should head back to light heavyweight? Where an immediate title shot would very likely be waiting?