Firas Zahabi: Conor McGregor Gave up After Things Got “Tough”

Renowned coach Firas Zahabi has weighed-in on Conor McGregor's latest defeat, and he believes the star may have given up in round two.

Tristar coach, Firas Zahabi, has repeatedly praised Conor McGregor for his abilities. But, the highly-regarded martial arts mind believes that the former champ gave up, after things didn’t go his way at UFC 257. 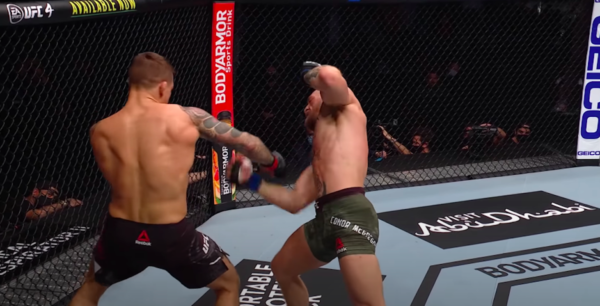 McGregor took on Dustin Poirier at the recent event, and the latter avenged his 2014 loss to the star, by finishing him in round two.

McGregor threatened with some big shots in the fight. But, Poirier punished McGregor’s lead leg with calf kicks and eventually put him away with a flurry of punches.

Well, during a recent chat session with fans, Zahabi offered this take on the bout (quotes via MMA Fighting).

“I think in the second round when McGregor was getting hit along the fence, I found it strange that he wasn’t – it seemed that he already gave up on the fight before he hit the canvas,” Zahabi said.

“I felt that he had given up on the fight because things were getting tough. The fight was getting tough, his left hand didn’t work, and he’s not used to that.

“McGregor, in the second round, dropped his best card. He landed that perfect left hand, the one he’s relied on his entire career and for one reason or another it didn’t work.

Poirier did not go down. And it seemed that McGregor got emotional about it.

He started covering up, he was getting hit, he didn’t look he was trying to circle out and survive.

He looked like a guy who was like, look, this is the end, I better do something. He kind of threw a few punches, but they were almost desperate.

He seemed to get very emotional, where as you contrast that with Poirier. When Poirier got hit, he looked cool, he kind of shrugged it off, he kind of kept boxing.

He was playing a game. He was cool and he was looking for his next move.”

Zahabi also had this to say about the heart and toughness of Poirier.

“He has so many advantages. But one thing I said, Poirier has the biggest heart.

You can’t deny that. Watch his Hooker fight, watch his fight with Eddie Alvarez, watch both of them.

The man has tremendous, tremendous heart and a will to win. And we saw the will to win overcome skill and technique.

Leading up to the event, there was certainly talk that if the fight went into the later rounds, it would favor Poirier. A key reason being that Poirier has been involved in several wars in the past, and has fought in more, longer fights than McGregor.

But, in this case, Poirier was able to hurt Conor early with kicks and then punches. Since the loss, McGregor has said the calf kicks played a decisive role in what transpired.

So, did he mentally check out somewhat? Once he realized his mobility was compromised?