As Conor McGregor's next bout nears, Dana White's confirmed tensions were running high between him and the star last year.

As Conor McGregor’s next fight approaches, Dana White hasn’t been heaping plenty of praise on the former UFC champ. But, recently he confirmed that things between him and the star were far from good, not long ago. 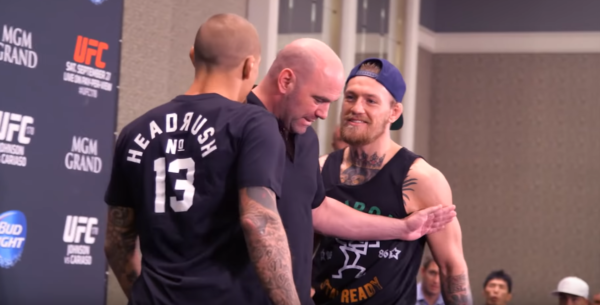 White confirms he was in a “bad place” with McGregor

McGregor is about to fight for the first time in over a year, as he’s booked to fight Dustin Poirier on January 23 at UFC 257. Leading up to the bout, White has repeatedly talked about how focused and motivated McGregor seems to be, and he’s also praised the skills of the former champ.

If you’ve followed McGregor over the years, you know that White has been one of the star’s biggest backers. But, last year, things between them started to go off the rails, when McGregor shared out images of a private exchange he had with White.

After a back-and-forth about Conor’s next fight, the disgruntled star shared out messages that showed White shooting down the idea of a fight between McGregor and Diego Sanchez. It seemed clear White believed McGregor would run through the aging veteran.

Well, at the time, White let it be known he wasn’t happy about what had transpired. While talking to ESPN more recently, White elaborated on how angry he was (quotes via MMA Fighting).

“We were in a really bad place then,” White said. “I was really upset. It wasn’t because he put out private messages.

“I talked to Diego face-to-face about it. Being the great human being that he is, [it’s] all good and then I was really, really upset with Conor.

Conor, I fixed that, we talked and we got through it and we’re in a good place now.”

White also had this to say about his relationship with fighters and Conor.

“Me and everybody are always in a good place as far as business goes,” White said.

Business is always good but that doesn’t mean that we’re good.

“We’re in a good business place and personally, Conor and I are in a good place right now.”

So, given how White’s been talking about Conor in recent weeks, it’s not surprising to hear him say he’s in a good place with the star. Case in point, White continues to talk about making Khabib Nurmagomedov – McGregor 2, which is a fight the retired champ has repeatedly shot down.