Dana White has said he wants Conor McGregor to focus on MMA right now, but the star believes he''ll box Manny Pacquiao before the year is up.

As UFC 257 nears, Conor McGregor has said he’s focused on a championship run at lightweight, and Dana White’s made it clear he wants the star to focus on his MMA career.

But, McGregor has helped ensure speculation about him boxing Manny Pacquiao remains in the news, as he maintains he’ll likely fight the star sometime this year. 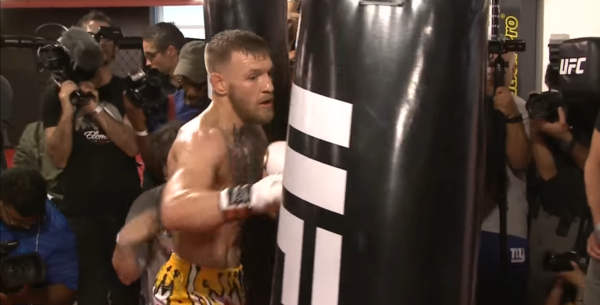 Pacquiao has talked about boxing McGregor for a little while now. But, rumors regarding the fight spiked last year, when McGregor claimed a bout with the Filipino legend would happen soon.

Since then, McGregor’s manager Audi Attar, who also represents Pacquiao, has said the fight’s inevitable. Other members of Pacquiao’s team have repeated he wants the match-up.

Then, when McGregor was booked to fight Dustin Poirier on January 23rd, there was talk about the fact it could help the Irish fighter prepare for Pacquiao. Poirier is also a southpaw.

So, when McGregor talked to The MacLife recently, he was asked about the rumored, Pacquiao fight. The former featherweight and lightweight champ said this (quotes via MMA Junkie).

“I know the talks are intensifying for this year,” McGregor said.

“So I am excited for a Manny Pacquiao bout, and it’s looking like it will take place this year.

What time this year, I’m not sure.

We’re going to have to have some good discussions with Dana and with the guys and the UFC after (UFC 257) and see where it goes, what’s there, what do we want.

McGregor was also asked to comment on WBC president Mauricio Sulaiman’s recent comments, in which he said McGregor could fight for a boxing title, if he beats a top contender.

“I appreciate the comments from Sulaiman and, you know, I’ll certainly attain a boxing world title before I call it a day,” McGregor said.

“And I would be very excited to do it against Emmanuel Pacquiao.”

So, it will be interesting to see how this all plays out. When White’s been asked about McGregor possibly fighting Pacquiao, he hasn’t sounded on board.

If McGregor beats Poirier at UFC 257, and then fights for the title this summer and wins it, would the UFC let him box Pacquiao to close out the year? And run the risk of having him KO’d, just as he’s got some momentum behind him?

That seems unlikely. But, so did a boxing match between McGregor and Floyd Mayweather Jr.