Coach Says It “Feels” Like Dustin Poirier’s The “Uncrowned Champion”

Poirier’s coach, the renowned Mike Brown, believes a lot of folks agree with that sentiment. 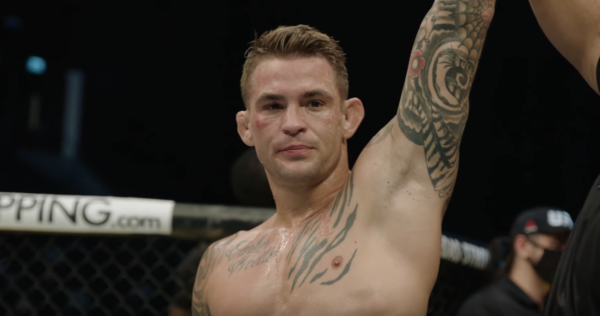 Brown says it “feels” like Poirier’s the lightweight king

Leading up to UFC 257, there was a lot of talk about whether the Poirier – McGregor bout could become a title fight, if Khabib confirmed he’s remaining retired. A few days before the event, Dana White reported that Nurmagomedov said he might come back, if someone impressed him.

So, due to that (and despite the fact Khabib repeated he didn’t have plans to fight), no belt was put on the line. But, after Poirier finished McGregor in thrilling fashion, ‘The Diamond’ proclaimed he’s the uncrowned champ.

Well, since then, Poirier’s coach at American Top Team, spoke with MMA Fighting. While talking about the notion Poirier is the champ, unofficially, Brown said this.

“It kind of feels like he’s the uncrowned champion,” Brown said. “His resume is unbelievable.

Look at how many former champions he’s beaten and in this last stretch of fights. It’s an unbelievably tough schedule that he’s had.

“This is just back-to-back-to-back. It’s an incredible stretch over very tough opponents. He feels like he’s in that position as the uncrowned champion.”

“It was tough because that really, with Khabib retired, that should have been a title fight,” Brown said.

“I feel like we’re in a similar situation with Yves Edwards years ago. He was the uncrowned champion when they kind of got rid of the title and the division was in limbo and he fought Josh Thomson.

That legitimately should have been for the vacant lightweight title, and he won that fight and looked great.

He doesn’t officially have that to his title, UFC champion.

“But I think a lot of people feel that way with Dustin. I think a high percentage of the experts and the other athletes, he’s the guy.

He was the No. 1 guy going into that, he was the No. 1 contender. Conor was the former two-division champion, definitely a fighter worthy of that fight. Biggest draw in the sport ever.

That really should have been a title fight.”

You can understand why Poirier, Brown and some of his supporters feel this way. It’s certainly true that he’s recorded some big wins and if Khabib had retired say, earlier in 2020, then chances are the belt would have been on the line.

But, there are others who will argue McGregor shouldn’t have been fighting for a belt, even if Khabib had vacated the belt earlier.

Heading into UFC 257, McGregor’s only win since 2016 was against Donald Cerrone, in a welterweight clash.