Recently Dana White offered a crptic response, when asked about Yair Rodriguez, and now we likely know why.

There’s been speculation lately about what the status of Yair Rodriguez is, and now it’s been announced the fighter is serving a suspension from USADA. 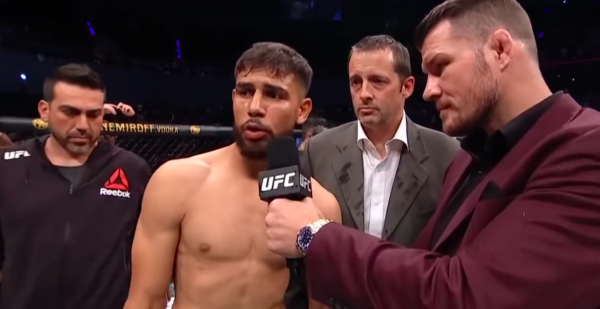 Rodriguez has been suspended for six months

The dynamic fighter hasn’t competed since October 2019 when Rodriguez scored a decision win over Jeremy Stephens. Rodriguez was scheduled to fight Zabit Magomedsharipov this past August, but he withdrew due to an ankle injury.

More recently, Dana White was asked about Rodriguez, and when he’ll fight next. The UFC President, however, didn’t disclose many details, but he did report that Rodriguez wasn’t going to be fighting soon.

Well, recently the UFC announced the following (the full statement can be read on the promotion’s official site).

USADA announced today that Yair Rodriguez, of Chihuahua, Mexico, has accepted a six-month sanction for a violation of the UFC® Anti-Doping Policy resulting from three Whereabouts Failures during a 12-month period.

Like all UFC athletes, Rodriguez, 28, is a member of the UFC Registered Testing Pool and is therefore subject to certain Whereabouts responsibilities, which allow him to be located for testing…

Rodriguez was eligible for a reduction in the period of ineligibility because his conduct did not raise suspicion that he was trying to avoid being available for testing. He received reductions based on his degree of fault and for his Full and Complete Cooperation.

Rodriguez’s six-month period of ineligibility began on September 8, 2020, the date on which his third Whereabouts Failure was declared against him.

Rodriguez will be eligible to compete in March, 2021. So, it will be interesting to see if the UFC books him to fight as soon as he’s eligible.

You have to wonder how internal discussions between the UFC and Rodriguez’s team will go. On one hand, USADA has concluded ‘Pantera’ wasn’t proactively trying to avoid testing.

But, still, he’s been sidelined for not following procedures, and chances are that probably doesn’t sit well with UFC officials.