There's been talk about Nick Diaz returning to the Octagon before. But, according to his manager, there's almost a 100% chance it will happen.

If you’re a big-time or old school, MMA fan, you may be thinking you’ll believe it when you see it. But, according to Nick Diaz’s manager, it’s almost certain the Stockton star will fight again next year. 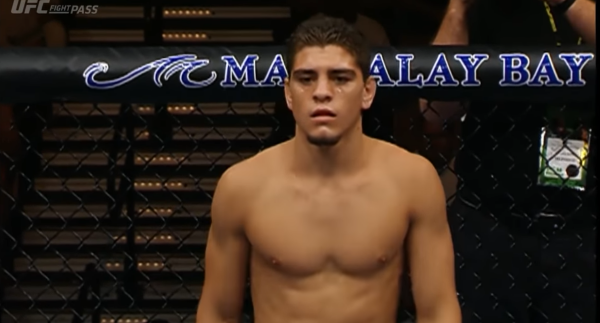 The now 37-year-old Diaz hasn’t fought since 2015, when he dropped a decision loss to the legendary, Anderson Silva. The fight was declared a no-contest afterward, however, when Silva tested positive for a banned substance (which he denied knowingly taking).

Well, since then, speculation about if and when Diaz will fight again has never gone away.

At various junctures, talk that a return was in the works has peaked. But, to date, Diaz hasn’t signed up for a fight.

Well, recently the fighter’s manager  Kevin Mubenga spoke with Fanatics View. While discussing what the odds are that Diaz will, finally, return to the Octagon, he said this (quotes via MMA Junkie).

“That’s the millions and millions of dollars question,” Mubenga said. “Yeah, the guy has been training. He’s been training for at least four months now straight.

“He took a little break last month and now we’re going to pick it back up in December and go into the new year hopefully with a new deal done,” Mubenga said.

“(We’ll) make sure the money is right and the opponent is right and we’ll be able to move forward with all of this.

“99.99999 (percent),” Mubenga said. “We just got to get everything else right with the organization and everything.

We’ll be able to move forward. He’s been training. People want to see (that).

Well, he’s been training as you can see for the last few several months. He took a little break now.

Now, it’s time to get back on there and just go through it. You don’t want to overtrain and over-exhaust yourself, especially when you don’t have a date yet.

But it was good to be able to go through the regimen and go through that small camp there to kind of feel everything out (and) get back with everyone (like trainer) Cesar Gracie.”

So, it will be really interesting to see if this happens. As noted, if some folks are skeptical, it’s understandable.

After all, it wasn’t that long ago when Diaz’s team were talking about him coming back to fight Jorge Masvidal, after he defeated Nick’s brother Nate.

That didn’t, or hasn’t happened.

But…it does look like Diaz is preparing to fight again. In September, it was reported the Stockton star did a test weight-cut.