Brandon Moreno has been on a roll, and has defeated the only man to defeat Deiveson Figueiredo to date: Jussier ‘Formiga’. But, according to the flyweight champ, the man he quickly subbed at UFC 255, Alex Perez, is a tougher challenge than the surging challenger. 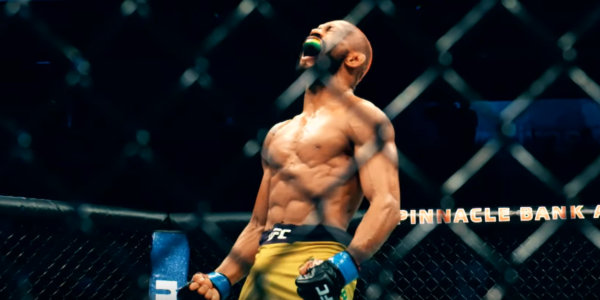 Perez was moved into the headliner for UFC 255, after Figueiredo’s original opponent, Cody Garbrandt, withdrew due to medical issues. Figueiredo went on to record his first title defense in quick fashion, however, as he caught Perez with a fight-ending, guillotine choke at the 1:57 mark.

Moreno also fought that night and stopped Brandon Royval in the opening round. After it was disclosed bantamweight champ Petr Yan was out of his December 12th bout with Aljamain Sterling, the UFC booked Figueiredo – Moreno for UFC 256.

Well, Figueiredo and Moreno have been trading verbal jabs for a little while now. So, not surprisingly, when Figueiredo spoke with MMA Fighting recently, he didn’t have too many kind things to say about the contender.

Here is some of what the champ had to say:

“Perez is way tougher than him, no doubt about it,” Figueiredo said. “But I’m ready to shut his mouth on the 12th so he doesn’t call me out or talk trash at me on social media again.

“Brandon Moreno comes from a boxing background; he has sharp little boxing, but speaking of jiu-jitsu and takedowns, I see no qualities in him.

So it’s an easier match-up for me to fight. I thought Perez’s game was easy, and I think his is way easier.”

“I’m a fighter that studies my opponents a lot, and that makes me be so certain of the way I can beat them,” Figueiredo said. “I work a lot on the things I study, and the areas where they are weak are the ones I’ll attack.”

“(Moreno) will be submitted,” Figueiredo said. “I’ll take him down and submit him. First round. He’s not a man to fight two rounds.”

Now, if you’ve been following Figueiredo, you know he’s not afraid to speak his mind, and he’s also gifted when it comes to promoting a fight. So, it could be that he does think Moreno is a tougher challenge than Perez, but doesn’t want to voice that publicly.

It’s also possible of course, ‘The God of War’ believes this.

Moreno has been on a solid run lately, however, and it’s also worth noting he’s never been finished.

So, if the champ does go out and stops Moreno quickly, his stock is going to continue to rise.

UFC 256 will be hosted by the Apex Facility in Las Vegas.