At various times, Dana White has talked about the possibility of launching Zuffa Boxing. But, it sounds like that won't happen anytime soon.

If Dana White finally, does start promoting boxing matches via Zuffa Boxing, it looks like it’s not going to be anytime in the near future. 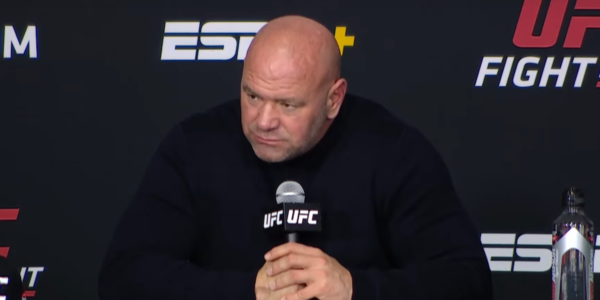 White claims boxing is “screwed up”

If you follow White, you know that he’s a big, boxing fan and that he trained in boxing for years. After the UFC played a promotional role in the 2017, boxing match between Conor McGregor and Floyd Mayweather Jr., White said he was thinking about promoting fights via Zuffa Boxing.

Well, since then, there’s been various junctures where White has said Zuffa Boxing could start operating soon. But, it has yet to happen.

More recently he spoke with TSN’s Aaron Bronsteter. White was asked about the recent rumour that Zuffa Boxing was looking at signing decorated boxer, Claressa Shields, before she ultimately signed with Professioanl Fighters League (quotes via Bad Left Hook).

“Never did I say that I was doing anything,” White said of the Shields rumors, “but I’ve been looking and kicking the tires of boxing for the last couple years.

The reason you’ve never seen me do anything is because that’s how screwed up and broken it is. That’s what a mess it is.

Yeah, I’m not doing anything any time soon.”

Shields move to the PFL comes at a time when it was announced YouTube star, Logan Paul, is going to box the undefeated, Floyd Mayweather Jr, February 20.

Since Paul has just one pro-bout on his record, the news didn’t sit well with many, combat sports purists. When asked a follow-up regarding whether he believes it’s too late now to get into the boxing, promoter’s game, White said this.

“It’s gonna require so much time, money, and the whole thing needs to be rebuilt and restructured.

There’s always gonna be fights that’ll pop up that’ll make money, you know, but when you’re in a situation where, you know, this Mayweather fight does more buys than Fury vs Wilder or, you know, some of these legitimate big fights, it’s pretty scary.”

White is certainly not the only person who has blasted the current state of boxing, and there’s no doubt that far too often, fans are robbed of seeing all-star fights due to promotional battles.

But, when you consider how different the financial models for boxing and MMA are, whereby, top tier boxers take home a much larger percent of the revenue, don’t be shocked if Zuffa Boxing never happens.

If it does, however, it will be really interesting to see if the UFC lets fighters move back-and-forth between the promotions.

All that aside, arguably boxing’s biggest current star, Canelo Alvarez, is set to fight Callum Smith next Saturday.

Amanda Nunes Is Clearly The Greatest Female Fighter Of All-Time