Cody Garbrandt thinks Deiveson Figueiredo will cruise to victory at UFC 256, but 'No Love' says that won't be the case at all when they fight.

Cody Garbrandt apparently doesn’t think Brandon Moreno will pose much of a threat to Deiveson Figueiredo this month when they throw down. But, recently the former bantamweight champ outlined why he believes he’s a much better fighter than the reigning, flyweight king. 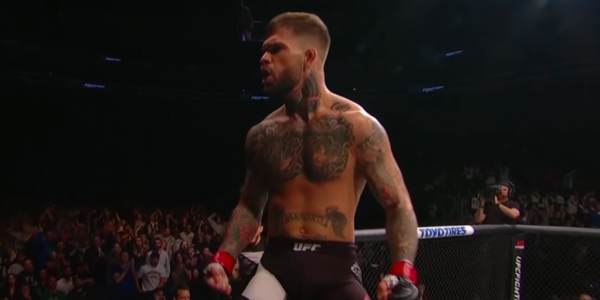 Garbrandt on why he’s “far superior” to Figueiredo

‘No Love’ was originally booked to fight Figueiredo at UFC 255 last month, in what was the latter’s first title defense. Garbrandt incurred serious medical issues after contracting COVID-19 this past summer, however, and he had to withdraw.

Figueiredo ended up fighting Alex Perez and recorded a quick, submission win. The champ has been booked for a quick turn-around bout with Moreno, as the two are set to battle at UFC 256, December 12th.

Well, recently Garbrandt spoke with ESPN, and he had this take on the upcoming fight (quotes via MMA Junkie).

“I feel like he’s gonna run over that kid. That’s another lamb being brought into the slaughterhouse, and that’s fine.

There will be no backing down with me. I’m excited for the fight.”

And, when discussing why he believes he will end the dangerous champ’s reign, Garbrandt said this.

“These guys sit there in front of him, and that’s where he bombs on them. I move too much. I’m too quick in and out.

A lot of these fighters, too, they don’t know how to fight backwards. They’re all like pressure fighters.”

I have a bigger fight IQ, I’ve learned from my mistakes. He’s only had one loss; I’ve had three at the top, and there’s just variables.

Does Garbrandt have a point?

So, there’s likely a lot of people who believe Garbrandt raises some good points here. It’s certainly true that Garbrandt has outstanding boxing and that when he’s fighting at his best, he can be an elusive target.

That said, Garbrandt isn’t long removed from a three-fight losing streak, which saw him get stopped in all three bouts.

If he starts to brawl with Figueiredo, or gets too reckless, it could cost him, quick.

First things first; however, Figueiredo needs to get by Moreno.