Dana White recently repeated his belief that Khabib Nurmagomedov will fight again. But, according to a new report, the star says otherwise.

If Khabib Nurmagomedov is thinking about fighting again, he certainly isn’t given any indication of that fact while speaking publicly. 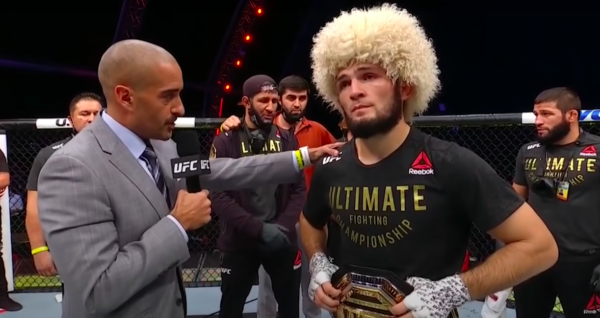 Khabib says he has “no competitive interest”

As you likely know, Nurmagomedov turned heads last month when after he choked out Justin Gaethje at UFC 254, he announced he was retiring. Khabib reported that after his father passed away earlier this year, due to complications from COVID-19, he promised his mother he would only fight one more time.

For quite a while, Khabib had said he didn’t plan to fight too much longer. But the consensus was he’d return to pursue the 30-0 mark.

Not long after UFC 254, Dana White said he spoke with Khabib and after doing so, he believed the champ would return. Then, this week, White repeated that belief.

Well, in two public appearances Khabib had done previously, since UFC 254, he repeated that he’s done fighting. According to a new report from RT, which is sourced from a report by Tass.ru, Nurmagomedov has said once again, that his fighting career is over.

While answering questions from youth in Dagestan, Khabib reportedly said this:

“You can fight until you’re 40 but there should be a goal,” he said.

“I had a goal to reach the summit and I got there. Further, I have no competitive interest.

“Next year I will graduate. I’d like to [build on] my thesis, do a masters course, dedicate more time to studying.

“I’ve bought sheep, I tend to my farm. I’d like to develop in this field a little. I have the bull calves out to feed, I have cows.”

In addition, the undefeated fighter also said this about his future, while discussing the possibility of getting into politics.

“I would like to take part in a place where I can bring a benefit,” Nurmagomedov said.

“It doesn’t have to be big politics. Right now I can bring a benefit without being a politician, and that’s enough for me.”

So, based on these comments, once again, it certainly sounds like Khabib’s fighting days are over. Further, he’s made lots of money and has other business interests (he’s reportedly involved in a new mobile network).

But, is it possible he just doesn’t want to publicly acknowledge that he could fight again? Since, in doing so, that would open the floodgates to questions about fighting Georges St-Pierre or Conor McGregor, etc? It’s possible.

It could also be that until there’s a real possibility of him fighting, say GSP, at lightweight, he doesn’t want to open the door publicly to a comeback.

It’s also somewhat puzzling that Khabib remains in USADA’s testing pool, if he is indeed retired. But, if you take him at his word, the legend’s fighting career is over.