Rafael dos Anjos Accuses Lightweights of Being Too “Strategic”

Rafael dos Anjos has returned to lightweight with a win, and the former champ says he's not a fan of how top contenders are picking fights.

It remains to be seen who Rafael dos Anjos fights next, now that he’s almost certainly returning to the top ten of the UFC’s lightweight division. But, provided he’s offered a top contender for his next opponent, it doesn’t sound like the former champ will be turning down the offer. 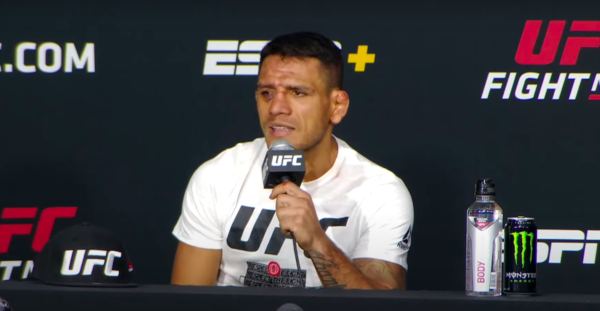 Dos Anjos says contenders are too “strategic” in taking fights

The 36-year-old dos Anjos took on Paul Felder at UFC Vegas 14 this past Saturday, in what was his first bout at lightweight since 2016. In recent years, RDA fought at welterweight, and he went 4-4 against many of the promotion’s best.

Dos Anjos went on to outscore the rugged Felder for a split decision win in the main event. Since Felder was ranked #7 heading into the fight, and because RDA is a former champ, it’s very likely he’ll be in the top ten when the rankings are updated.

So, who does RDA want to fight next (aside from Conor McGregor who he has called out)? Following UFC Vegas 14, dos Anjos said this (quotes via MMA Junkie).

“Whoever leads me to the gold,” dos Anjos told reporters. “I moved up to become a champion again.

Everything I do in life I try to be the best at it. When I move up to welterweight, I had a good shot, I won three fights in a row, I beat a former champion, I fought for the title.

I didn’t win, but now I’m back to lightweight, and I want to fight for the belt. The belt is my goal and whoever leads me to the belt.

I don’t like that. I’m an old-school guy and everybody fights everybody back in the day.

But I feel like guys these days, they plan it so strategic. We’ll see how things are going to go and how they’re going to play out.”

So, it will be interesting to see if any of the top contenders out there respond to dos Anjos here. Is he referring to the fact that initially, not many contenders were calling for a fight with Michael Chandler (Tony Ferguson has now said he’ll fight the former Bellator champ)?

All that aside, no one can certainly accuse dos Anjos of hand-picking opponents.

Case in point, during his run at welterweight he agreed to fight Colby Covington and Kamaru Usman back-to-back. Two pressuring wrestlers that everyone knew would pose serious challenges for RDA (and he lost both fights via decision).