Paul Felder Vows He’ll be Back, Following Loss to RDA

Although Paul Felder has talked about retiring in recent months, the lightweight is reporting he'll be back, despite his latest setback.

Despite the fact Paul Felder’s plan to jump into the title mix at UFC Vegas 14 didn’t work out, and although he’s talked about retiring, ‘The Irish Dragon’ will be back. 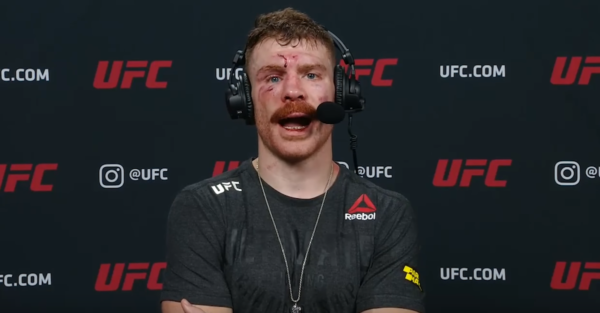 Felder is “not going anywhere”

The 36-year-old Felder took on Rafael dos Anjos in the headliner of Saturday’s card, and he ended up losing the fight decision. Dos Anjos mixed in his wrestling effectively against the rugged striker, and outscored him throughout five rounds (although one judge, surprisingly, awarded the fight to Felder).

Felder had taken the bout on just a few days notice, after Islam Makhachev withdrew.

After the memorable fight, Felder said the following, while discussing to ESPN (quote via MMA Junkie).

“I can tell you guys with certainty: I’m not going anywhere right now,” Felder said. “I lost my passion for this sport pretty bad.

I can tell you I’m not done. I might lose my ranking a little bit, but what I’ve learned in this sport is none of that matters.

What matters is going out there, showing up, showing who you are inside and what determination you have.”

And while reflecting on how he felt in the bout, and his performance, the contender noted this.

“I got a little tired there in the fifth, but I really think the problem is I was in striking shape and in really good cardio shape for the triathlon, but I hadn’t grappled,” Felder said.

“I’ll be honest. Now I can be completely up front with you guys: I have not stepped foot in an MMA gym in almost four months.

So (my performance) was completely based on pure endurance training and some pad work.

I said I was going to give hell to a former world champion and give five rounds if I had to, and we just gave a five-round battle.”

In terms of Felder’s plans to continue fighting, this is good to hear. While he did come up short against RDA, it was a competitive bout. Despite the fact Felder took the bout on short notice.

Further, while Felder has lost three of his last five bouts, all of those defeats were via split decision. One was against fellow contender, Dan Hooker this past February.

The other was against welterweight Mike Perry in July, 2018.

So, if Felder has rediscovered his passion for fighting, then this is a win-win situation for fans, given his toughness and abilities.