Patricio ‘Pitbull’ Freire scored yet another, jaw-dropping win at Bellator 252 on Thursday, and afterward, he proclaimed he’s the best featherweight in the game. While there’s sure to be some discussion and debate about whether that’s indeed the case, one person who has ‘Pitbull’s’ vote, is Scott Coker. 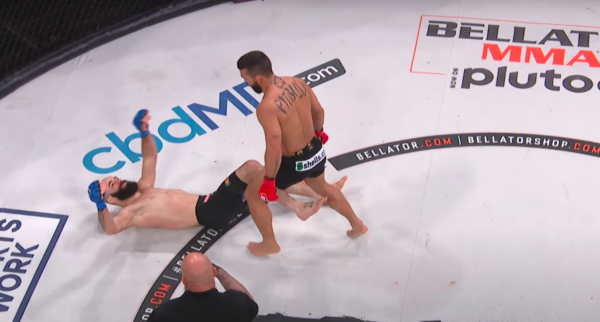 ‘Pitbull’ says he’s the best featherweight in the world

Freire took on Straight Blast Gym’s Pedro Carvalho in the main event of Bellator 252, and before long, he had the featherweight in trouble with big shots.

Then, around the two-minute mark, ‘Pitbull’ put Carvalho down with a couple of booming punches and that was that. The victory was Freire’s sixth straight and moved his record to 31-4.

Following the victory, which advanced Freire to the semifinals of the featherweight grand prix, the champ said this (quotes via MMA Junkie).

I’m complete. Now I have 11 knockouts and 11 submissions. There’s no other featherweight in the world that is as complete as I am.”

And perhaps not surprisingly, Bellator’s President Coker was on board with Freire’s assessment.

He was here even way before me. I’ll tell you what: I looked back and I saw a lot of his old clips over the last week, just looking around on our YouTube channels and different places.

He is not afraid of anybody. He’s going to bring it. I think he’s the best. Right now? He’s the best featherweight in the world.”

So, it will be interesting to see what fans and observers have to say on this. Since the UFC remains the biggest promotion in the world, the unfortunate reality is that there’s a lot of casual fans out there who have never seen Freire fight.

That aside, is Freire better than the UFC’s featherweight king, Alexander Volkanovski? Given Freire’s power and submission skills, it would be ridiculous to rule out that he could beat Volkanovski.

The UFC champ, however, has defeated Max Holloway on two occasions, who not long ago was widely considered to be the best featherweight in the game.

Freire, on the other hand, is also Bellator’s lightweight champ, and he took out Michael Chandler to win that crown.

At the end of the day, it’s just unfortunate that we probably won’t see these two fight. Or, if they do, it may not be during their peak years.