Country music legend Dolly Parton shares why her husband , Carl Dean, likes to stay out of the spotlight and how that works for them.

In the entertainment industry, it’s rare to see a marriage that stands the test of time. That’s what makes country music legend Dolly Parton’s marriage of 54 years to her husband Carl Dean so special!

Dolly Parton with her husband Carl Dean.
They’ve been married since 1966. pic.twitter.com/w01P6ZsbR0

Parton Reveals Why Her Husband Avoids The Spotlight

Anyone who has ever been a fan of Parton’s knows that fans rarely ever see Dean in public. In fact, Parton recently revealed that her husband avoids the spotlight so much that rumors have swirled at times that he does not even exist!

“A lot of people have thought that through the years, because he does not want to be in the spotlight at all,” Parton, 74, told Entertainment Tonight. “It’s just not who he is. He’s like, a quiet, reserved person and he figured if he ever got out there in that, he’d never get a minute’s peace and he’s right about that.”

“I’ve always respected and appreciated that in him and I’ve always tried to keep him out of the limelight as much as I can,” she continued. “He said, ‘I didn’t choose this world, I chose you, and you chose that world. But we can keep our lives separate and together.’ And we do and we have. We’ve been together 56 years, married 54.”

Related: Dolly Parton Discusses Her Open Marriage And The ‘Affair’ That Left Her Feeling Suicidal

Parton and Dean met in 1964 and to married in 1966. While Dean is a homebody and Parton is on the road a lot performing, she actually believes that their time apart has helped their marriage stay strong through the years. 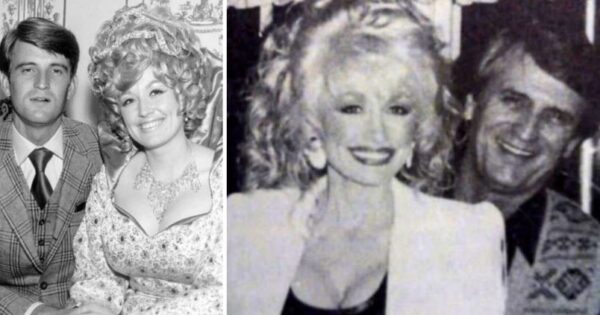 “Our joke about the fact, when people ask me why it’s lasted this long, I say, ‘Because I stay gone.’ And there’s a lot of truth in that — the fact that we’re not in each other’s faces all the time,” Parton explained. “But we do have a great respect and admiration for each other. We both have a great sense of humor. So, we have a lot of fun.”

When they are together, Parton said, “We have very similar tastes… we love to travel around our little RV, and we don’t like parties and all that stuff.”

Related: Dolly Parton Dishes The Secret To Keeping Her Marriage Strong After 54 Years

Parton delves further into her marriage to Dean in her new memoir “Dolly Parton, Songteller: My Life in Lyrics,” which she wrote during her months in quarantine. When asked why she decided now was the time to write a memoir, Parton had a simple answer:

“I had to have something to do. Couldn’t get out in concert. Had to make a living somehow.”

“I let people have a glimpse into a lot of old photos, and my growing up in the business, a lot of family photos, and some of my early days as well,” she added of the book. “Even for my true fans, I think they’re gonna get a lot of new stuff that they’ll enjoy when they thought they knew everything about me. They’ll find a few little nuggets that they didn’t know.”

Dolly Parton has starred in at least 17 movies and had more than 300 television appearances. Her latest movie, Christmas On The Square, comes out later this month. And, she just released her first Christmas album in 30 years called “A Holly Dolly Christmas.”

Aside from writing her memoir, Parton also wrote and released a song called “When Life Is Good Again” that touches on compassion, thoughtfulness, living in the moment, and her strong Christian faith.

Parton has led one incredible life, so something tells us that memoir of hers is a must-read!

Dolly Parton Devastated After Her Beloved Brother Randy Passes Away