Coker: Bellator And ‘Rampage’ Are “Heading in a Different Direction”

After initially joining Bellator back in 2013, it looks like we won't see 'Rampage' Jackson fighting under the promtion's banner again.

Aside from a one-off return to the UFC in 2015, ‘Rampage’ Jackson has been working with Bellator for approximately seven years. But, it looks like the former champ’s run with the promotion is done. 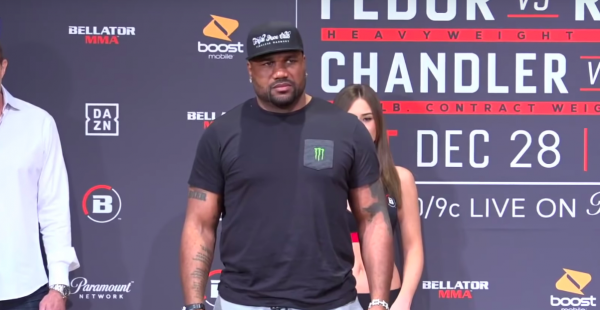 Jackson (38-14) hasn’t fought now since December last year, when he was promptly taken out by fellow legend, Fedor Emelianenko. That marked the only time Jackson fought that year, as his bout prior was in September 2018, when he stopped Wanderlei Silva.

Well, ahead of Bellator 253 this week, the promotion’s president Scott Coker was asked about the status of ‘Rampage’. Coker reported the following (quotes via MMA Junkie).

“‘Rampage’ Jackson, he’s another legend,” Coker said. “When he fought his fight in Toyko, that was his last fight with Bellator.

We haven’t even talked to him or engaged in any kind of conversations. He’s a complete free agent to sign wherever he wants to. …

If you look at the direction the company is headed, it’s heading in a different direction.”

Not that surprising but interesting

Given that Jackson is now 42 and that he’s lost three of his last four fights, the fact Bellator hasn’t tried re-signing the star isn’t that surprising.

Further, while Fedor is a legend, Jackson took some heat for that performance. The star himself acknowledged that he came in overweight for the contest.

But, what’s particularly interesting here is Coker’s comments about Bellator going in another “direction”. The exec has made similar comments recently in discussions about fighters, some of whom are older and past their primes.

Historically, Bellator has consistently signed aging, former UFC stars with the hope of driving interest in the company. But, it looks like Bellator is shifting away from that promotional model to one that relies on homegrown talent.

All that aside, it will be interesting to see if Jackson continues to fight and where.