Anderson Silva is no longer on the UFC roster and it sounds like the legend has some issues with the promotion, following his exit.

Leading up to UFC Vegas 12, it certainly looked like the UFC and Anderson Silva weren’t on the same page, regarding his future. Well, a few weeks out from the event, Silva has released a statement, in which he’s claimed the UFC tried to “force” his retirement. 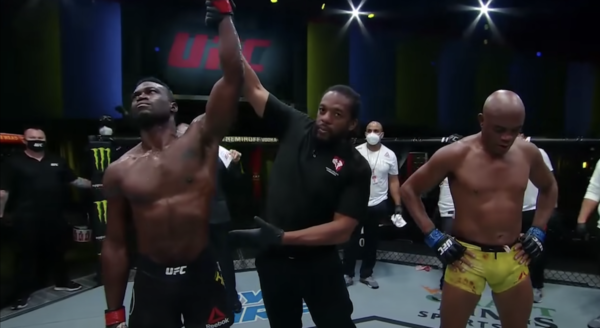 Silva believes he can still compete with “elite” fighters

When it was announced Silva was going to fight Uriah Hall on October 31st, Dana White relayed that he believed the bout would be the legend’s last. The UFC’s marketing team promoted the fight from that angle.

But, as the event neared, Silva was non-committal about retirement. The former middleweight champ only said that UFC Vegas 12 would mark his final bout with the UFC.

Well, Silva had some good moments in his fight with Hall. But, the legend was stopped by the latter in round four.

After the fight, which was Silva’s third straight defeat, White said the star should never fight again Since then, it’s been confirmed that the UFC has released Silva, opening the door to him fighting elsewhere if he wants.

More recently, Silva released the statement below, in which he made it clear he plans to keep fighting.

Hey everyone…
I didn’t want to talk about this subject, especially because I’m on vacation and as the saying goes, “a deal is a deal”
I’ll make it clear to all my fans that this is a moment of joy and gratitude!!!
I feel free, after an attempt to force my retirement!

I love and have always loved what I do, winning and losing are a part of it, it has absolutely nothing to do with age, I made technical mistakes and lost, but I didn’t lose what’s most important, the will and the desire to continue doing what I love, I still have the warrior spirit and that burning flame in my heart that motivates me, I have total belief that I can continue to compete in the elite of MMA.

I take this moment to reflect about my career and to plan my next moves… Stay Tuned!!!

A post shared by Anderson "The Spider" Silva (@spiderandersonsilva)

So, the fact Silva has reported he wants t keep fighting isn’t a surprise. When he didn’t announce he was retiring after losing to Hall, and only said it was his last UFC fight, it seemed clear he wasn’t going to hang up the gloves.

Did the UFC try to “force” Silva to retire? Or was there some sort of miscommunication when the UFC offered him the Hall fight?

Clearly, at some juncture, the UFC brass decided Silva was not going to be offered the final fight on his UFC deal, regardless of how he did against Hall.

All this aside, it will be interesting to see where Silva ends up fighting. Bellator’s Scott Coker doesn’t sound interested in signing the legend, and it’s hard to imagine the soon to be 46-year-old competing in the PFL’s tournament format.