Brian Ortega and 'The Korean Zombie' are all set to square off, following today's weigh-ins, and you can watch their face off right here.

Chan Sung Jung and Brian Ortega have been trading verbal shots over the last year or so, and that intensity was on display at today’s ceremonial weigh-ins for UFC Fight Island 6. 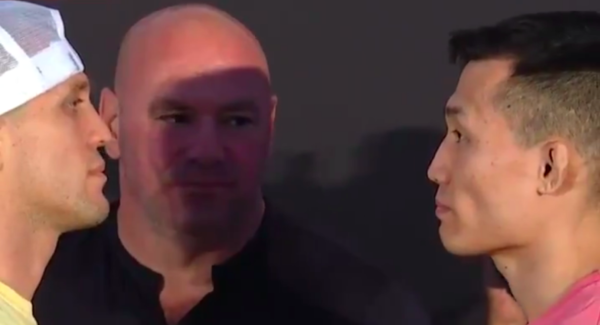 ‘The Korean Zombie’ and Ortega face-off

‘The Korean Zombie’ and Ortega were originally supposed to fight in December, 2019, but Ortega had to drop out due to a knee injury. Jung (16-5) wound up facing Frankie Edgar and stopped the legend in the opening round.

Jung proceeded to take some verbal pokes at Ortega in the coming weeks about ‘T-City’ pulling out of their bout. That spiked tensions and it led to Ortega (14-1) allegedly slapping Jung’s buddy and translator, Jay Park.

Well, the two are set to throw down in the headliner of UFC Fight Island 6 tomorrow, and you can check out their face-off at the ceremonial weigh-ins below.

Who earns a crack at the 145 belt: @BrianTCity vs @KoreanZombieMMA!

The official weigh-in results for tomorrow’s event can be viewed here.

UFC On ESPN Results: Calvin Kattar Kicks Off 2022 With Win