Amir Amirkhani kept coming until the final horn, but Edson Barboza's striking proved to be too much for the rugged featherweight.

Edson Barboza recorded his first win in the UFC’s featherweight division tonight, as the vaunted striker worked his way to an impressive, victory over Makwan Amirkhani. 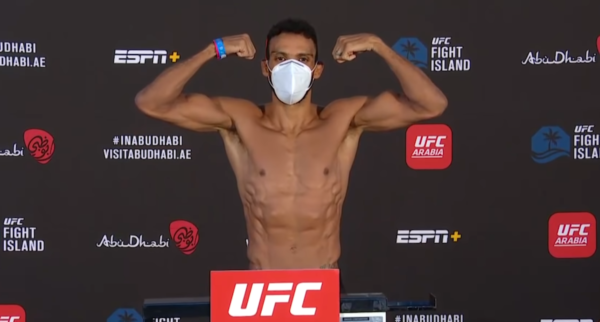 Barboza came out pressuring and Amirkhani stayed back. Neither man threw much in the opening 90 seconds. A couple of minutes in, Barboza scored with a kick to the body. Moments later Barboza dug a right to the body as well. Late in the round, Amirkhani  shot in for a takedown but Barboza defended. Amirkhani tried clinching up not long after but Barboza worked his way free. The latter planted a hard right and then fired in a body kick, but Amirkhani  countered with a takedown.

Barboza scored a with right to begin the round and Amirkhani  countered with a jab. Both men continued to come with feints and head movement, but with few strikes. Barboza dug a hard right to the body a couple of minutes in. Moments later, Barboza sent Amirkhani to the deck with a straight right. Barboza started hunting for a choke but a bloodied Amirkhani defended. The fight returned to its feet and Amirkhani shot in, but Barboza sprawled nicely. In the final minute, Barboza sent Amirkhani  back to the ground with another pound right, and once again, he looked for a choke. Amirkhani defended – again – and in the ensuing scramble, he took the top position.

Barboza scored to the body again with a right, and moments later, he defended a TD from Amirkhani . The latter came with another TD and this time he got it. Amirkhani worked from within Barboza’s guard but wasn’t able to land much from the top. Amirkhani planted an elbow from the top but eventually the ref stood them up.

Moments later, Barboza cracked Amirkhani with a huge left hook. Late in the round, Barboza tagged Amirkhani  with a beautiful combo. Impressive peformance by Barboza.

Here are the results for far for UFC Fight Island 5, which is taking place in Abu Dhabi.