Brian Ortega likely locked up a bout with Alexander Volkanovski last night, but 'T-City' also sees a rematch with Max Holloway in his future.

Brian Ortega is almost certainly next for featherweight champ Alexander Volkanovski, after working his way to an impressive, clear cut win over Chan Sung Jung. But, Ortega doesn’t believe his time throwing hands with Max Holloway in the Octagon is over yet. 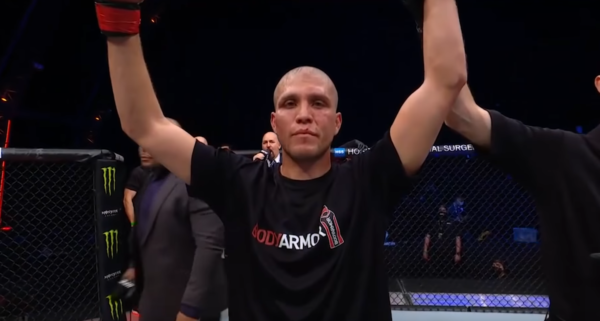 Ortega sees “rounds” with Volkanovski and Holloway in his future

Ortega faced Jung in the headliner of UFC Fight Island 6, and he pretty much cruised to a decision win. What made the win particularly impressive was that Ortega largely relied on his striking to outscore the hard-hitting Jung.

Leading up to the fight, the consensus seemed to be that if the bout was spent in the kickboxing and boxing range, ‘The Korean Zombie’ would rule the day.

Well, prior to the card, UFC President Dana White said that the winner would advance to face Volkanovski. While talking about the champ, who has beat Holloway twice now by decision, Ortega said this (quote via MMA Junkie).

“I watched his fights – both of his fights with Max,” Ortega said, of Volkanovski. “Obviously, after that, I had to watch that. (He’s) very methodical, very technical with the way he approached everything.”

On Saturday, Ortega was fighting for the first time since December, 2018, when he lost via doctor stoppage to Holloway. So, while talking about his future, Ortega had this to say about Holloway.

“I said this in the beginning, in the very, very beginning when the fight was first set up: ‘We will meet again.’ He’s going to stay at the top,” Ortega said.

When you consider the abilities of Holloway, and that he’s only 28, of course, there’s a good chance he and Ortega will cross paths again. Whether it’s in a title fight or not (Ortega is 29).

That said, if Holloway decides to move up to 155 pounds, then that will reduce the likelihood of a rematch with Ortega, significantly. At least in the short term.

Although Holloway lost his rematch with Volkanovski by split decision, and a lot of people had it scored for him, you never know, he could decide to move up a weight class..