Nurmagomedov Wouldn’t do TUF With McGregor For “$5 Billion”

Talk about Conor McGregor and Khabib Nurmagomedov fighting again has never gone away, but it certainly sounds like the champ's moved on.

On account of reports that the UFC is looking at having Conor McGregor and Dustin Poirier fight again, talk about McGregor fighting Khabib Nurmagomedov once more has spiked. But, as Khabib gets set to fight Justin Gaethje at UFC 254, it certainly sounds like the champ’s closed the book on his rivalry with McGregor. 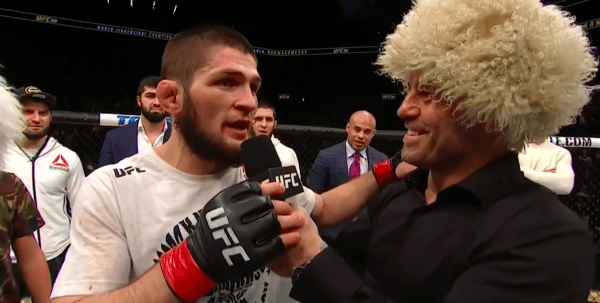 Ever since Khabib submitted McGregor in October, 2018, talk about the two fighting again has ebbed and flowed. For the most part, Khabib has said that McGregor needs to defeat top-tier contenders before he earns a rematch.

The lightweight champ has repeated that, even after Dana White said Conor had earned another title shot, by defeating Donald Cerrone in January.

Well, more recently White reported that he had approached Khabib about coaching opposite of Conor on TUF, if he beats Gaethje, October 24th. The rivals would fight again after the show concluded, as per the custom of the series.

But, at the time, White said Khabib turned down the offer, on account of McGregor’s recent exchange with the UFC President. McGregor shared out images of a text correspondence he had with White this past spring, regarding his next bout.

White wasn’t happy with McGregor’s actions, but the star defended the move.

Well, Khabib recently spoke with ESPN’s Brett Okamoto. While discussing why he turned down the offer to coach opposite of Conor, the undefeated fighter said this.

“It’s done. Everything is done Oct. 6, 2018 [the day Nurmagomedov submitted McGregor at UFC 229]. I finish him. I finish everything about him.”

Is this really done?

If you follow Khabib, you know that he has changed the criteria for Conor to earn a rematch in the past. So, if you’re not completely sure we won’t see the rivals fight again that’s fair.

For a while, Khabib said Conor would need to defeat multiple contenders before earning a rematch. But not that long ago, Nurmagomedov said if McGregor beats Poirier, he could be next for a title shot.

All that said, Khabib has repeatedly talked about his wish to fight Georges St-Pierre, and to do so after Gaethje. If that fight can’t happen, who knows?

Khabib could be thinking about finally fighting Tony Ferguson, if he wins his next bout? Or, maybe he’d be fine walking away from the game at 29-0 rather than 30-0?