Israel Adesanya may not see anything revolutionary in the striking game of Darren Till, but the star admits he's still a big fan of it.

It remains to be seen if Darren Till and Israel Adesanya end up fighting down the line. But, it sounds like Adesanya’s already done plenty of homework regarding the middleweight’s striking. 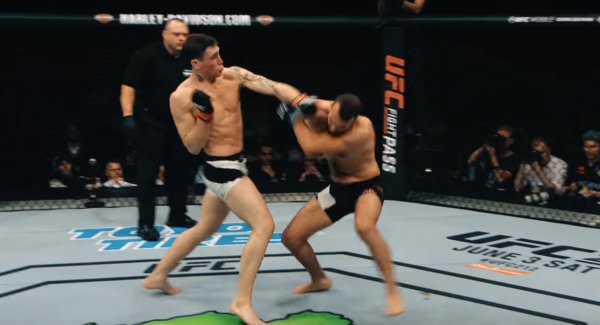 For months, there’s been plenty of talk about how a fight between Adesanya and Till would unfold. After all, both fighters are widely regarded to be two of the best strikers in the middleweight division, and in the world, period.

Till has acknowledged Adesanya’s awe-inspiring striking in the past, and while talking to MMA Junkie recently, “The Last Stylebender” said this about the British star.

“I love striking, and I love the way he strikes,” Adesanya said about Till. “Very basic Muay Thai, and I mean that with all respect, but also his clinch game and his elbow game is advanced, but he sticks to his basic Muay Thai.

His left kick, his left straight, the way he curves his left. Beautiful to watch and yeah I take inspiration from a guy like that just in a way who he is. ‘I don’t care, I don’t give an (expletive).’

That’s Darren Till. I take inspiration from that like yeah, don’t give an (expletive).

“When he fought Gastelum, it was (at UFC) 244 in New York, I think I was there live, he fought him and he said he didn’t care if he got knocked out and I was like that’s a dangerous man.

I took inspiration from that because in my fight here as well, I’ve said I surrendered, I didn’t really care what happened after the fight.

This is interesting stuff from the middleweight champ and there’s likely a lot of people who agree with him.

While Till isn’t known for busting out jaw-dropping, unorthodox or explosive techniques, his striking is something to admire, no question.

So, will striking enthusiasts get to see this all-star match-up at some juncture?

On one hand, when you consider Till is only 27 and that Adesanya is 31, you would think at some point, these two will cross paths in the Octagon. Further, Till is ranked #6 in the UFC’s 185 division, so he’s not that far out from a title shot.

But, all this depends on what transpires in Till’s upcoming fights.

While the Liverpool fighter’s a fan favorite, and understandably so, he has lost three of his last four bouts. On December 5th, he’s going to face Jack Hermansson, who is extremely dangerous and a tough out.

If Till loses that fight, then his path to a bout with Adesanya will get significantly longer. It will become longer, in a division that includes the likes of Paulo Costa, Yoel Romero, Jared Cannonier and Robert Whittaker, who he already lost to.