As Khabib Nurmagomedov gets ready to fight Justin Gaethje, Georges St-Pierre says he'd return to face the champ if the "stars" align.

So, what’s the 39-year-old legend, currently thinking about that all-star fight? And returning to the cage for it? It sounds like GSP would do it, but there’s a pretty big condition. 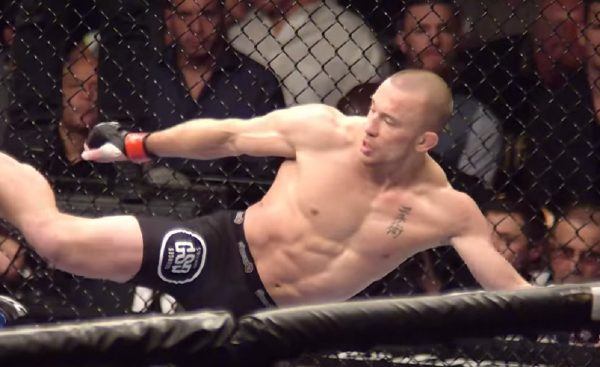 GSP says the “stars have to align”

For months, St-Pierre relayed that he wanted to fight Khabib and the latter also repeatedly said he wants to face the former welterweight and middleweight champ. But, UFC President Dana White wasn’t on board with the idea, since GSP ended up vacating the middleweight title he won in 2017, without ever defending it.

In more recent months, however, White has sounded more open to the bout. Following the tragic passing of Khabib’s father, Abdulmanap, there’s been talk that Nurmagomedov (28-0) could retire soon, as his father thought he should go out at 30-0.

Abdulmanap also reportedly thought Khabib should hang up the gloves at that mark, especially if he reached after fighting GSP.

So, what’s GSP thinking these days? He recently talked to TSN’s Aaron Bronsteter, and said this (quote via MMA Junkie).

“Why step back in? But why not step back in?” St-Pierre said while talking about whether he should return to fight Khabib. “We only live once.

That’s the question that I’m facing now, you know? If I have an opportunity to do it and all the stars align and I don’t do it – because I’ve still got it now.

“I’m kind of satisfied,” St-Pierre said. “Do you know what I mean? Satisfaction for the athlete is the death. You’re done.

You’re finished when you’re satisfied. In order to come back, I’m in a mental state of mind where I’m not sure. The stars would need to be aligned perfectly.”

Catchweight bout, a big part if making the stars align…

Based off the comments above, one could certainly conclude it sounds like there’s a good chance Khabib – GSP could happen, provided Nurmagomedov beats Gaethje.

But…GSP also had this to say:

“I haven’t cut weight for a long time,” St-Pierre said. “If I go down to 155, my performance will be compromised.

I know Khabib is about the same size as me. He’s maybe bigger than me when he’s offseason.

He’s used to it. I’ve never been a big fan of cutting weight. Even when I was a welterweight, I was 185. Most guys now are much bigger than 185.

“That’s one of the principles of the art of war. Know the terrain. I don’t know. I’ve never fought at 155.

He knows, I believe, to make it fair, we need to fight in a place we’ve never been.

Both of us. That would have to be a condition to me coming back if it happens.”

Spoke with the legendary Georges St-Pierre and asked why he would want to step back into the UFC pressure cooker when he could be comfortably retired.

His reply: "Why step back in? But why NOT step back in? We only live once! So that's the question that I'm facing now." pic.twitter.com/IxYLhBE68O

Everything GSP has said here is completely understandable. But, if he is unwilling to make the cut to 155 pounds, it likely reduces the odds of this bout happening, significantly.

You never know; White has said he wants to make Khabib happy. But, historically, White hasn’t been down with catchweight bouts, and the UFC would very likely want a title on the line.