Fired up Tony Ferguson Has a “Message” For Justin Gaethje

Tony Ferguson knows he has some work to do before he challenges for the title again, but "El Cucuy" has a message for his fellow contenders.

Although Tony Ferguson is coming off a decisive loss to Justin Gaethje this past May, “El Cucuy” clearly hasn’t abandoned his pursuit of the UFC’s lightweight title. In fact, recently the longtime contender and former interim champ had a fiery message for Gaethje and the division’s top fighters. 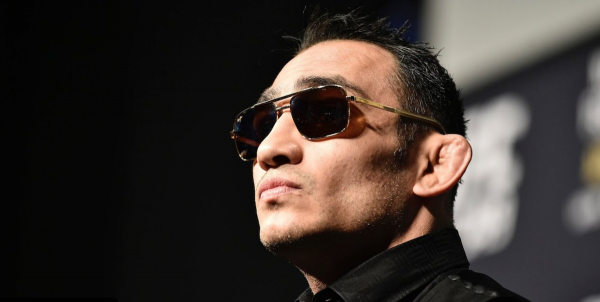 As 2020 began, the plan was to have Ferguson fight Khabib Nurmagomedov and the two were booked to fight at UFC 249. Due to the COVID-19 pandemic, however, Khabib was stranded in Russia and Ferguson ended up fighting Gaethje instead.

As you surely know, Ferguson’s awe-inspiring 12 fight streak was snapped by Gaethje, who recorded a fifth-round, TKO win.

Fast forward to today, and Gaethje is booked to face Khabib at UFC 254, October 19th. As it stands right now, it’s not clear what’s next for Ferguson.

Well, recently Ferguson spoke to ESPN, and the renowned lightweight made it clear he still has his sights set on hoisting the lightweight belt (quotes via MMA Junkie).

“Everybody wants me to fight Khabib right?” Ferguson said. “But I’ve got to earn my right back. OK, cool.

Who’s it going to be? Dustin? Or is it going to be Chandler? I don’t give a (expletive). I said it was a tournament. Now we’re adding in people. Alright, cool. Here we go again.

Today marks the celebration, right? Khabib and (Conor) McGregor. That (expletive) wouldn’t have happened unless they stripped my belt. So, (expletive) you. Pay me instead of this (expletive) clown.

Justin Gaethje, you’re (expletive) welcome you have a belt, son. I guarantee you I’m going to tell you to go get my belt because your ass is going to get (expletive) whipped. I’m coming for it.

So both you and (expletive) fathead, this is a message for both of you knuckleheads. It’s my mat and my time.”

There you have it. On account of Ferguson’s abilities, and who he  has defeated during his UFC run, it’s not surprising he’s still focused on winning the title

But who is next for Ferguson?

The question is, however, who is the UFC going to book to face Ferguson next? The UFC tried making Ferguson versus Dustin Poirier, but the promotion was unable to come to terms for the all-star fight.

While talking about the negotiations, Ferguson made it clear he isn’t happy with how they went. Here’s just some of what he had to say.

“I’m going to be real,” Ferguson said. “I don’t know what their plans were before or after, but I was already ready.

I was already counting on it. Seriously, I planned around it. I’m not much of a planner, so I was already going ahead of it but then Dana wanted to speak for me.

He wanted to go out there and be like, ‘Tony is going to take this fight.’ Like, bro, we’re not friends. I never said we were friends.

“It’s just business, right? I’m there when you need me and then obviously when you don’t. Seriously, man. I’m a contractor.

I do my thing. I love him and I love UFC and stuff like that, but I’m just a piece of meat out there. Do you know what I mean?”

So, it will be interesting to see what happens here. Could Ferguson – Poirier still happen? Or will the UFC table an offer Ferguson can’t refuse for a fight with Michael Chandler?