Israel Adesanya argued Paulo Costa was tailored made for him as an opponent, and the middleweight champ did his best to prove that tonight.

Many people predicted that Paulo Costa would present a stiff test for Israel Adesanya at UFC 253, but that didn’t turn out to be the case. 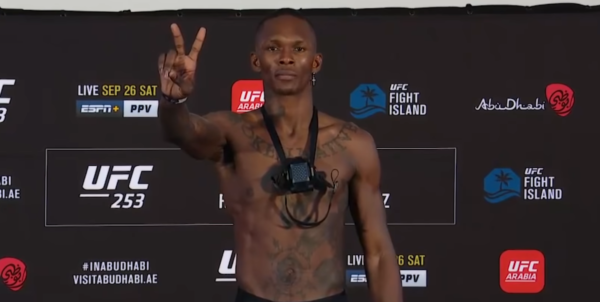 Adesanya fired a leg kick right away and Costa waved him on. Another kick to the leg from Adesanya. Costa returned fire with one of his own and then he went to the body with a kick. Adesanya planted another kick to the calf of Costa and the latter started to taunt. Costa followed up with a Yoel Romero impersonation. Hilarious. More leg kicks from Adesanya. The champ scored with a kick to the body and Costa picked up his pressuring.

Adesanya scored with a couple more leg kicks to begin round two. Costa missed with a head kick but he scored with one to the leg. Costa’s lead leg was extremely red at this point. Costa attempted to flurry in but Adesanya countered and moved out. Adesanya cracked Costa with a head kick and the challenger was cut above the right eye. Adesanya started going to his boxing more and moments later, he sent Costa to the deck. After landing a few more shots, the fight was stopped. Dominant, decisive win for “The Last Stylebender”. Wow.

Here are the results for UFC 252, which took place on Yas Island in Abu Dhabi.