Following Diego Sanchez's bloody loss at UFC 253, Dana White isn't sure yet, if it's time for the veteran to hang up the gloves.

Due to Diego Sanchez’s age, and how many wars he’s been in, there’s been debate about whether he should retire for a little while now. Following the legend’s latest defeat, UFC President Dana White says he’s going to take some time to think about “The Nightmare’s” future. 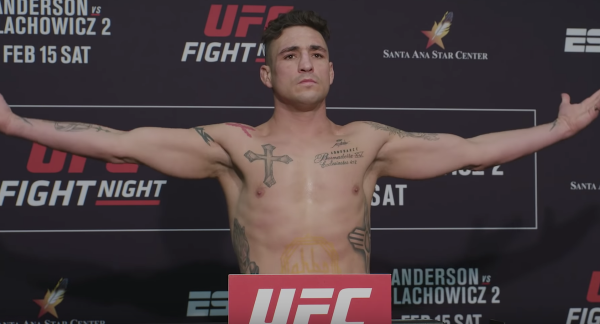 The 38-year-old Sanchez took on Jake Matthews at UFC 253, and from the get-go, the rising welterweight outscored him on the feet. Sanchez hung in there, as he almost always does, but by the end of the fight, he was bloodied and battered.

Matthews won the bout via a clear-cut, decision.

Well, due to how Sanchez looked in the fight, and because of where he’s at in his career, debate regarding his future has spiked again. But, when White was asked about Sanchez’s fighting future after the event, he said this (quotes via MMA Junkie).

“I love Diego Sanchez, and I don’t know,” White said. “It’s something I’ve got to think about, and it’s obviously something that I’ve got to talk to the guys about back when we get home in the office and see what everybody thinks.

I got these guys now – you got Diego Sanchez, who fights his heart out every time he fights, he was part of ‘TUF 1,’ everybody knows how I feel about those guys, and he’s just a great person.

“Then you got ‘Cowboy’ (Cerrone), who you can say all the same things about, and as these guys start to get older and start racking up some losses, it’s tough.

But Diego is like – I want to say, I don’t know for sure off the top of my head, but he’s won three of his last five or something like that, but yeah it’s tough.

It’s the not fun part of this job.”

Now, officially, Sanchez is 3-2 in his last 5 bouts. But…his win over Michel Pereira this past February was due to disqualification, as Pereira blasted Sanchez with an illegal knee.

The New Mexico fighter was almost certainly en route to a defeat in that fight until the foul happened. Before facing Pereira, Sanchez lost via decision to Michael Chiesa.

Before those fights, Sanchez did defeat Craig White and Mickey Gall in back-to-back bouts.