Brian Kelleher doesn't like the way Sean O'Malley reacted to his first defeat. But, he also believes "Sugar" could be doing so for business.

A lot of people have piled on Sean O’Malley for how he’s spoke about his first defeat, and the man who defeated him, Marlon Vera. While Brian Kelleher also isn’t a fan of some of the things O’Malley has said, he suspects “Sugar” has been deliberately playing the heel angle. 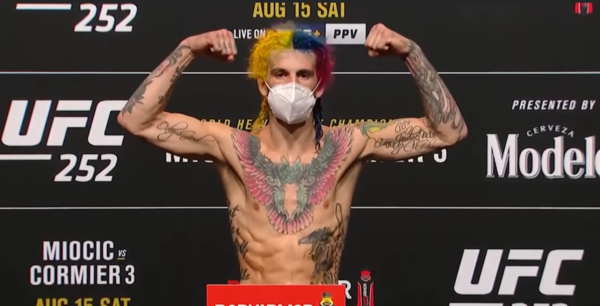 Vera became the first man to defeat the rising star last month, by stopping the bantamweight prospect in the first round. After O’Malley incurred some issues with his lead leg, Vera followed up aggressively and finished the fight with a series of punches and elbows from above.

Replays of the fight showed that O’Malley started having trouble with his leg after he took a hard kick from “Chito”. But, O’Malley stopped short of crediting Vera for the win and called the bantamweight a “journeyman”.

More recently, O’Malley argued Vera got lucky, and he also fired back at fans who have criticized him for his take on the loss.

Well, during MMA Fighting’s recent A-Side Live Chat, Kelleher had this to say about O’Malley, and how he’s talked about the defeat.

“I don’t like the way he handles the loss,” Kelleher said. “Still putting Chito down, not really accepting it.

But I do think that business-wise, he’s kind of doing this on purpose.

I don’t know if he’s getting information from other guys that have done this in the past, but you know, you have people that love you, you make people hate you, and you have all areas covered as far as fanbase goes, and people that want to see you fight whether they want to see you win or lose.

“I think O’Malley’s kind of playing that role where he’s like, ‘Alright, I’m gonna make you hate me. I’m just gonna keep being brash and cocky and you know, I’m still undefeated.

So F you, and I’m gonna keep being me’ type of thing. I don’t blame him for doing that, but I like to see a little bit more humble honesty when it comes to real true answers for facing defeat.”

And while talking about the end of the fight, and the ankle issue O’Malley incurred, Kelleher said this.

“I feel like this whole circumstance gave O’Malley that out,” Kelleher said. “To be like, ‘Oh, I fell, my ankle, something was hurt. That’s why you won and I was beating you before that,’ and this and that.

Fights are always like that. Some guys winning and then he loses, sometimes you get caught by something and it’s a legit combination the guy threw and he got you.

I think Chito was being patient and he got leg kicked himself really hard, but then when he leg kicked O’Malley it kind of put him down. It hurt him enough to put him down and not be able to stay on his leg.”

It’s hard to say for certainty if O’Malley is playing it up, in terms of not crediting Vera for the win. But, it will be interesting to see how “Sugar” carries himself moving forward, and what he says, if and when he loses again.