Now that Alistair Overeem has got by Augusto Sakai, the leged is open to fights with Derrick Lewis and former foe, Jairzinho Rozenstruik.

After demonstrating once again that he remains one of the UFC’s top heavyweights, it will be interesting to see who Alistair Overeem will battle next. While Overeem didn’t go out of his way to call for a rematch with Jairzinho Rozenstruik, the legend said he’s willing to run it back with his former foe. 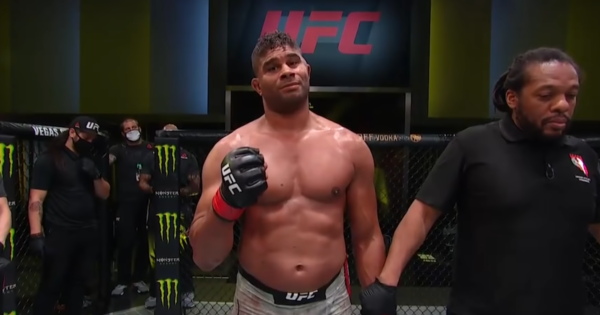 Overeem says he “destroyed” Rozenstruik in their first bout

The 4o-year-old Overeem took on rising contender Augusto Sakai at UFC Vegas 9 on Saturday, and he stopped the 29-year-old in round five. Sakai had his fair share of moments early on in the bout, but as the fight wore on, Overeem took over with his wrestling and top game.

The victory was Overeem’s second, since he was stopped by Rozenstruik last December. In that fight, Overeem was pretty much cruising to a decision win, until the dangerous kickboxer decked him late in round five.

The fight was stopped with just four seconds left, and since then, Overeem has repeatedly argued the bout shouldn’t have been called.

So, not surprisingly, after his win at UFC Vegas 9, Overeem was asked about the possibility of fighting Rozenstruik next. The Dutch fighter said this (quotes via MMA Junkie).

“Rozenstruik, I destroyed that man,” Overeem said. “I schooled him. In my opinion, it was a very bad decision by the ref, waiving it off with zero seconds left.

Should the UFC book the rematch?

So, when you consider what’s going on in the UFC’s heavyweight title shot mix, the timing for Overeem – Rozenstruik seems right.

Francis Ngannou is likely next for the champ Stipe Miocic, and Derrick Lewis is fighting fellow top contender, Curtis Blaydes on November 28th. So, when you consider Overeem is ranked #5 and Rozenstruik is #3, that rematch makes sense.

The question is, however, does Rozenstruik want to run it back? One could certainly argue he has much more to lose than gain.

While talking about his next bout, however, Overeem also said this.

“No preference (of opponent),” said Overeem, who also said he’d be willing to fight Lewis down the line, but argued his teammate Blaydes will defeat the feared slugger first.

“You know what my preference is? Quality time with my girls. I miss them. Camp is gruesome. I’m separated for eight weeks.

I kind of do that on purpose to get extra hungry and extra motivated. For now, I’m going to fly back early tomorrow and spend some quality time with them. Then we’ll figure it out.”