Two more ONE Championship events are scheduled for the month of August, and the fight cards have been released by the promotion.

After returning recently with ONE Championship: No Surrender, the Asia-based MMA promotion will hit the airwaves twice more this month.

ONE: NO SURRENDER II

The main event of ONE: NO SURRENDER II will see former ONE World Title challenger Saemapetch Fairtex take on countryman Rodlek PK.Saenchaimuaythaigym in a ONE Super Series Muay Thai showdown.

Saemapetch Fairtex, ONE Super Series Athlete, stated: “It’s such a huge honor and moment for me to return to ONE Championship after having no events in the past few months. There hasn’t been an opportunity to compete for a while, so I am really grateful. I’m also very happy that we will fight in Bangkok. I trained very hard for this fight, and I want to give it my all inside the ring. I just want to tell Rodlek to prepare himself well, because I want us to give the fans an exciting fight.”

Rodlek PK.Saenchaimuaythaigym, ONE Super Series Athlete, stated: “It’s a privilege to be able to compete right here at home in Bangkok. Saemapetch is a young, hungry fighter, and we’re going to put together a thrilling main event. I know he’s a tough fighter. I’ve seen the way he fights, and he’s very good. But I’m ready to put forth the best performance of my career. It’s going to be a lot of fun.”

Other ONE Super Series contests at ONE: NO SURRENDER II include a bantamweight kickboxing bout between Leo Pinto of France and Mehdi “Diamond Heart” Zatout of Algeria, a featherweight Muay Thai contest between Thai stars Sorgraw Petchyindee Academy and Pongsiri PK.Saenchaimuaythaigym, and another Muay Thai bout between China’s Huang Ding and Tunisia’s Fahdi “The Gladiator” Khaled.

ONE: NO SURRENDER II
From Bangkok, Thailand
Friday, 14 August

ONE: NO SURRENDER III 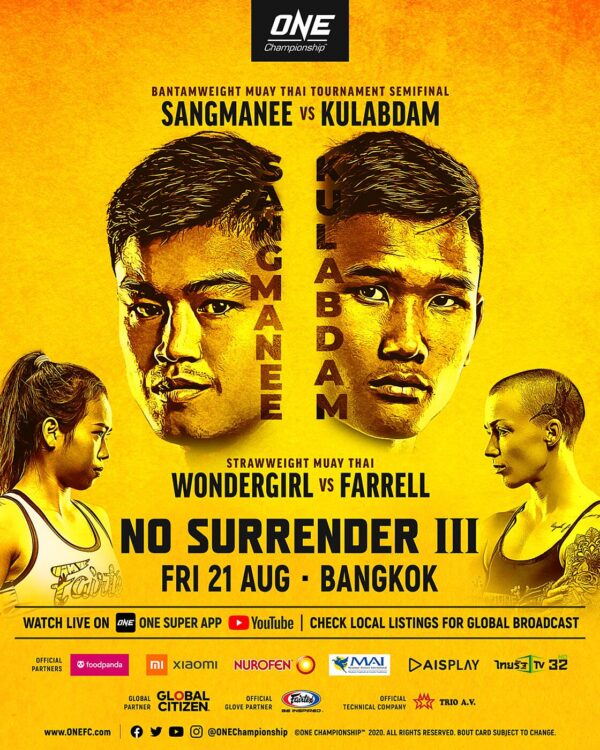 The main event of ONE: NO SURRENDER III features Thai stars Sangmanee Klong SuanPluResort and Kulabdam Sor. Jor. Piek Uthai who will face off in a Muay Thai contest in 4oz. gloves.

Sangmanee Klong SuanPluResort, ONE Super Series Athlete, stated: “I’m happy for the opportunity to compete in this event here in Thailand. Even though it’s a closed-door event, ONE Championship has a huge audience worldwide and I’m glad my fans all across the globe can watch my fight and support me. I hope to make new fans as well with my fighting style. My opponent, Kulabdam, is a very dangerous Nak Muay. He’s even more dangerous now that we are going to fight in 4oz. gloves which will no doubt amplify his power. He’s aggressive and powerful. However, I’m one hundred percent physically and mentally ready for this fight. I will try to put my best performance together and get one step closer to my goal of becoming ONE World Champion.”

Kulabdam Sor. Jor. Piek Uthai, ONE Super Series Athlete, stated: “I’m so glad to be able to compete in ONE Championship again. This is my second time in the ONE Championship ring, and I’m excited because this fight is happening in my home country. I’ll be ready to go no matter what. To my opponent, let’s make our fight fun and exciting for the fans. I’ve prepared a sound game plan with my team, and we’ve studied this fight from all angles. I want to show fans what we’ve got planned on event night.”

Also on the card is a trio of highly-anticipated Muay Thai spectacles.

Making their ONE Super Series debuts are four women of the ring. Wondergirl Fairtex of Thailand is set to take on Brooke Farrell of Australia, while Estonia’s Marie “The Valkyrie” Ruumet locks horns with Ayaka “Little Tiger” Miyauchi of Japan. At men’s flyweight, Thailand’s Mongkolpetch Petchyindee Academy will face Cambodia’s Sok Thy.