Last week, the bike shop founded by cyclist Lance Armstrong in Austin, Texas announced an end to its contract with the Austin Police Department. However, directly following the announcement, Mellow Johnny’s Bike Shop also made it clear that it still expects the Austin police to protect them.

The Star-Telegram reported last Wednesday that Lance Armstrong’s Mellow Johnny’s Bike shop was canceling its five-year contract with the Austin Police Department. The contract was worth nearly $350,000, and would not be renewing it.

Labeling all law enforcement officers in a bad light and refusing to sell them bicycles to do their job is not a good look @MellowJohnnys Austin! Terrible business decision. @CLEAT @NAPOpolice @NatPoliceAssoc @lancearmstrong 🇺🇸 pic.twitter.com/b3aZDk2vNS

However, in a ironic and quite hypocritical turn, the bike shop made it clear in their announcement that it still fully intends to receive the protection of Austin Police.

“In the context of the current evaluation of community policing in Austin, we have decided to no longer purchase, re-sell, and service police-issue Trek bikes and accessories under a City of Austin RFP the shop was previously awarded,” the shop said in a statement posted to Facebook.

After saying that police were on the “wrong side of history”, the shop had the nerve to add, “We are not anti-police.”

“We do believe our local police force will protect us from the very threats we are receiving right now,” the shop continued. 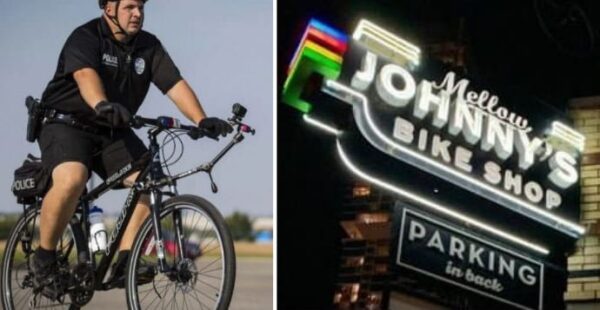 The bicycle shop went on to say that management had discussed this decision with employees, insisting that refusing to work with the police is the “best” way “do our part to keep our customers safe and this city moving in the right direction.”

“Businesses can no longer be non-participants in the communities they serve. We chose what we think will do the most to suture these divides and place our community on the right side of history,” explained the store, which was opened by Armstrong in 2008.

“We wish this entire community peace and progress and togetherness at the conclusion of these trying times,” the statement concluded. “And we intend to be a part of the discourse, struggle, and growth for Austin, as we have since we opened our doors in 2008.”

Dear AustinIn the context of the current evaluation of community policing in Austin, we have decided to no longer…

Anti-Police Sentiments At An All-Time High

Anti-police sentiments have been at an all-time high over the past few weeks in the wake of the death of George Floyd, who died in police custody back in May.

Since then, radical liberals all over the country have been on a mission to defund the police, which has only led to a major upticks in crime in Democrat-run cities where the left has succeeded in this endeavor.

Shame on Armstrong and his shop for caving to the liberal mob and abandoning police when they need support more than ever.

Mike Ditka Is Furious – Doubles Down On His Message To Anthem-Kneelers: ‘Get The Hell Out’