To date, no one has consistently negated the wrestling of Khabib Nurmagomeodv. But Justin Gaethje says he has a plan to do just that at UFC 254.

Many fighters have tried and failed to halt the relentless takedowns of Khabib Nurmagomedov. But, Justin Gaethje says he has a strategy to violently counter the awe-inspiring wrestling of the lightweight champ. 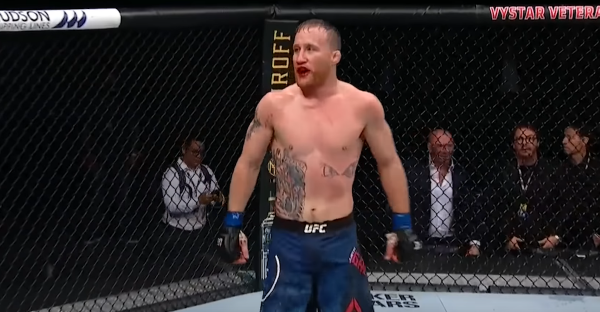 Gaethje plans to create a “zone of death”

The 31-year-old Gaethje has been booked to face Nurmagomedov at UFC 254 on October 24th, after dominating and stopping Tony Ferguson in May. The victory was Gaethje’s fourth straight, and in all four of those bouts, he stopped his opponent.

Well, due to Gaethje’s own, NCAA Division 1, All American wrestling pedigree, a lot of people have questioned how the October 24th bout will play out? Is Gaethje the man who will repeatedly negate the galaxy class wrestling of the champ?

Recently the interim champ appeared on Michael Bisping’s “Believe You Me” podcast. While talking about the wrestling component of the fight, Gaethje made up some eyebrow raising comments (quotes via MMA Fighting).

“So my only goal when I step in there is to create as many car crashes as possible.

So, ya, a “zone of death”. If you’ve watched Gaethje fight, you know he’s no slouch when it comes to violently ending a fighter’s night.

Gaethje also had this to say about the upcoming bout and how it will play out.

There is no fight with more skill sets, other than submissions – you could bring submissions to the table, but who the f**k needs that?

Outside that, this represents the pinnacle of the sport. He’s 28-0. I have two losses, both of those were fights of the year.

“I have never not come out of the cage without my opponent being absolutely broken from physical damage.

He’s never walked out with a lot of physical damage, so we’re going to see who can impose their will and only one of us will. I do think it’s going to be a battle for the ages.”

It remains to be seen if Gaethje will be able to punish Khabib with strikes, like he plans. It is worth noting, however, that Khabib hasn’t faced someone like Gaethje to date.

This is why a lot of people, including Khabib’s friend and teammate, Daniel Cormier, believe Gaethje will be the champ’s toughest test yet.