Darren Till has dropped three of his last four bouts, but the Liverpool star is still vowing he'll win UFC gold.

The last couple of years haven’t really gone according to plan for Darren Till. But, despite the setbacks the former welterweight and now middleweight contender has incurred, Till is still very confident he’ll win a UFC title. 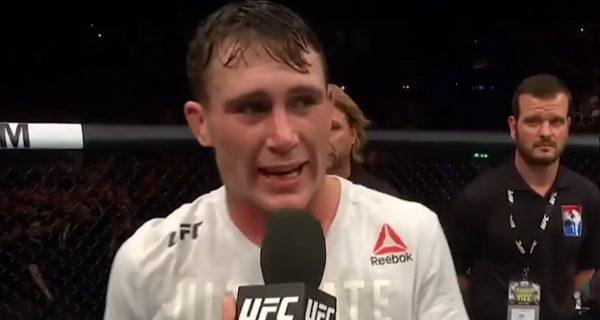 Till still believes he is destined to be a champion

This time in 2018, Till was preparing to face Tyron Woodley at UFC 228, after going undefeated in the Octagon to date. Till came up short against the now-former welterweight champ, however, and was submitted in round two.

The talented striker’s plans to get back on track were violently sidetracked by Jorge Masvidal in his next bout, as Till was KO’d by ‘Gamebred’ in March, 2019. The now 27-year-old elected to move up to middleweight, and after defeating Kelvin Gastelum last November, Till was booked to fight the former champ, Robert Whittaker last month.

Although the fight was close, Whittaker handed Till his third loss in his last four bouts, via a decision.

Well, since then, Till spoke with ESPN. Despite the fact he’s incurred several losses in the last couple of years, Till hasn’t lost confidence he’ll become a UFC champion (quotes via MMA Junkie).

Until then, I’m just going to enjoy my last few days here (Dubai), and then I’m going to look forward to my next fight.”

“I just want to fight, I just want to be the best,” Till continued. “I can’t do anything else. I will not be able to retire if I don’t become one of the best. …

And while referring to his recent loss to Whittaker, Till said this:

“He was the former champ. A few more fights, and I am going to be the champion. I want that.

I see all these – when you’re doing your chats with (Daniel Cormier) and he’s calling Khabib (Nurmagomedov) the GOAT, I love seeing that because it makes me thrive to one day have my name mentioned like that.

People could watch this now and be like, ‘Yeah, whatever Till,’ and people will be like, ‘Yeah, Till’s definitely going to be a GOAT,’ but it’s just what I set out to do.

Silly to write Till off

So, when you consider Till’s age (27), his abilities, and his drive, it would be ridiculous to write him off as a future champion. That said, there’s no question he’ll need to learn from his defeats and build on his overall game, if he hopes to make a title run at 185 pounds.