Jose Aldo had his moments in his latest title fight, but ultimately the striking and cardio of Petr Yan delievered him the vacant, bantamweight title.

Jose Aldo showed plenty of heart and toughness in his bid to win another UFC title, but he was unable to halt the awe-inspiring rise of Petr Yan. 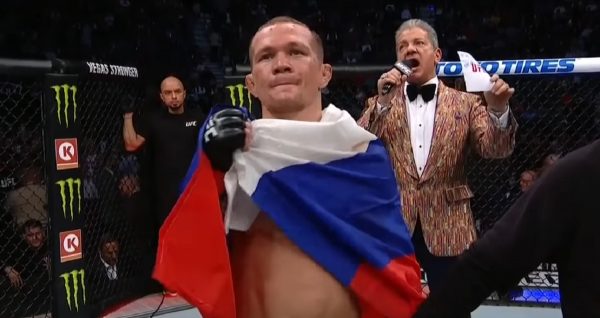 Neither man came out with much lateral movement at all. Instead, they both elected to fire shots in the pocket. The bantamweights fired in jabs and straights, and Aldo also scored with a couple of leg kicks.

Later in the round, Aldo shot in and took Yan down, but the latter wound up on top. Yan clearly hurt Aldo with a big shot to the body from above, before the round came to an end.

The second frame saw more of the same, whereby, both fighters stood in front of each other, firing the occasional strike. Aldo planted a couple more leg kicks and Yan switched stances. Yan scored with a couple of nice lefts mid round, and Aldo responded with more kicks and jabs. Yan came with a flurry right before the second round ended.

Aldo went to the body with a kick and a knee to begin round three, and Yan continued to fight out of the southpaw stance. Yan picked up the pace and threatened with big lefts.  Aldo tagged Yan a couple of times to the body with punches, and they push the Russian back.

The phone booth fight continued but the volume decreased somewhat. Later in the round, Yan started scoring more often and his face began to show signs of the shots. As round three ended, Yan appeared to be the fresher of the two fighters.

Aldo ate a left not long into round four, and Yan continued to threaten with big lefts. The two battled in the clinch for several moments, and Aldo defended a sweep attempt. The Brazilian star’s volume slowed while Yan continued to press. Late in round four, Yan cracked Aldo with several hard punches and then tripped him to the floor. Yan fired down several blows from above and finished the round on top.

Early into round five, Yan stunned Aldo with a huge left and moments later, the legend was sent to the mat. Yan bombed in elbows and punches from above, working from a crucifix position. Aldo was badly bloodied up by the barrage, and the former featherweight champ turtled up. Yan continued to pound in blows and Aldo’s blood was all over the canvas. Finally, after multiple, really, not needed blows, the fight was finally stopped.

Yan is the new bantamweight champ.

Here are the results for far for UFC 251, which is taking place on Yas Island in Abu Dhabi.