Rose Namajaunas admits the pressure of being champ was tough. But, as she gets set for her return at UFC 251, 'Thug's' reporting a different mindset.

After Rose Namajunas lost the UFC’s strawweight title in 2019, the star admitted that she hadn’t enjoyed the pressure of being the champ. But, as ‘Thug’ gets set to make her return to the cage, she’s reporting she has a much different outlook on holding the belt. 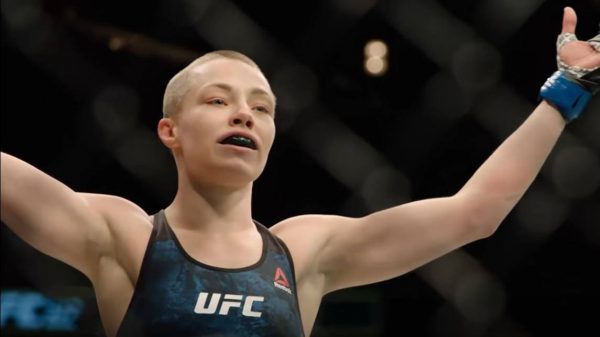 Namajunas can better “handle” being champ second time around

The 28-year-old Namajunas is getting set to face Jessica Andrade at UFC 251 this weekend. It will mark the second time they’ve fought.

The strawweights battled in May, 2019, and Andrade took the strawweight belt from Namajunas, via a vicious, second round slam.

After the loss, Namajunas admitted that she had been having trouble dealing with the pressures of being the champ. But, as she gets set to launch her comeback, ‘Thug’ reported things have change (quotes via MMA Fighting).

“It’s a lot healthier now,” Namajunas said. “I feel like when you go lift weights and you pick up the bar to see how heavy something is?

That’s kind of how my title reign was.

“I know how to handle it a lot better now. But you know, I’m also not thinking past this fight. I’m focused on Jessica Andrade.

And, in addition, Namajunas relayed that she has a new level of confidence as her rematch with Andrade nears.

“Yeah, there is a level of excitement that comes with correcting all of my mistakes and seeing the results of my training,” Namajunas said.

“In the first fight, I had some confidence but it wasn’t all the way real. Now I have much more genuine confidence, real confidence based on my preparation.

Not just based on what I did before. Just technically speaking, we patched up some holes but really it’s overall, it’s the mentality and it comes from the preparation and I think that’s the biggest difference.

I’ll be more myself and look more like my other fights where I was being myself but kind of a 2020 version of that. New and improved.”

These comments are really interesting to hear, and it will be fascinating to see how Namajunas performs, and whether she can avenge that loss.

Before Andrade finished the fight with the slam, Namajunas was outscoring her with awe-inspiring striking.

If Namajunas can return to the win column, don’t be surprised if we see her fighting for the belt in the not too distant future. When it comes to skills and athletic ability, there are not too many women on the UFC roster who can rival her.