Renee Young & Kayla Braxton both have COVID-19 and here's an update on their heath. And, Brian Pillman Jr makes his AEW debut this week.

Many in WWE have contracted COVID-19, so here is an update on Renee Young and Kayla Braxton. Also, Brian Pillman Jr will work for AEW this week.

Despite a lack of communication, WWE seemed to have COVID-19 somewhat under control. Then, the virus quickly spread late last month and it is rumored dozens of employees are sick.

As of now, WWE will not be releasing the names of those infected. Although, several people have come forward to confirm they tested positive.

Renee Young was the first person to make a public announcement. Later, she was followed by Kayla Braxton, Adam Pearce and Jamie Noble.

As of now, Young seems to be doing much better. The  Wrestling Observer Newsletter noted how most of the symptoms passed and the worst is hopefully over.

Her husband, All Elite Wrestling (AEW) World Champion Jon Moxley, had his test return back negative. Still, he decided to stay in Nevada to make sure Young continued to get healthy.

Due to the scare, Moxley will not defend the title at Fyter Fest against Brain Cage. Instead, that match has been pushed to July 15 at Fight For The Fallen.

AEW commented on the matter and Moxley is simply taking extra precautions. Taz cut a promo on Dynamite about Moxley, where he called WWE’s standards “sloppy shop.”

For what it is worth, WWE now makes anyone not appearing on camera to wear a face mask. Before, the promotion had the opposite mindset.

As for Braxton, this the second time she contracted the virus. At first, people were upset with Braxton for returning to work after already being sick.

She took lots of slack on social media, which caused her to delete those accounts. Although, people are starting to change their tune.

Now, she is being praised for transparency and care for co-workers. WWE even sent out a memo with her name.

The memo had Braxton disclose how she believed she contracted the virus. Her information could help others to avoid people or places where the virus has been spotted.

Meanwhile, there is no update on Pearce on Noble. All we know is that they will not be at WWE tapings for at least two weeks as they self-isolate. 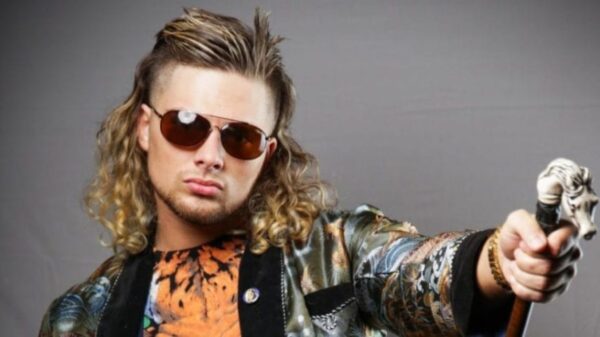 AEW is always brining in fresh names and that trend continues this week. Brian Pillman Jr has been confirmed for AEW Dark, where he challenges Shawn Spears.

For those unfamiliar, Pillman’s father was well known in the pro wrestling business. Brian Pillman worked for WCW, where he teamed with a future Steve Austin.

The team was split and the eldest Pillman would suffer a major ankle injury. After a lengthy time away, he returned to the business as part of WWE.

Sadly, Pillman passed away in 1997 due to  arteriosclerotic heart disease.

Currently, Pillman Jr is signed to MLW. He is likely using a loophole, like MJF did, to work the upcoming match.

If all goes well, AEW might offer Pillman an exclusive contract. That is what happened with MJF and his career has since skyrocketed.

If you watched AEW Dynamite last week, Pillman was attendance. He was invited and kept quiet as a member of the audience.