Joseph Benavidez knows the championship chapter of his career is ikely done. But, the fighter isn't ready to retire on the heels of a one-sided loss.

After being battered and choked out in his latest title shot bid, Joseph Benavidez understands at this stage of his career, another title run is pretty unlikely. But, the soon to be 36-year-old fighter says he’ll be back for at least on more fight. 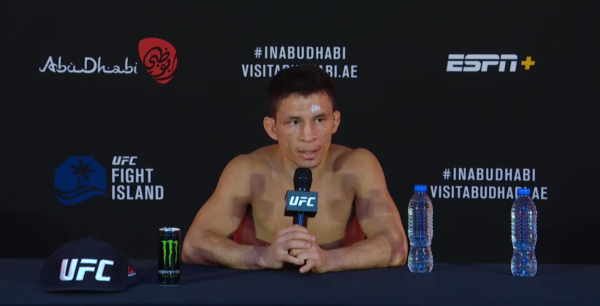 Benavidez faced Deiveson Figueiredo for a second time at UFC Fight Island 2, and once again, the rugged American was finished by the Brazilian. Unlike their first  bout, however, no accidental headbutt occurred, and Figueiredo choked Benavidez out after dropping him several times in the opening round.

Since Figueiredo missed with for their first bout in February, he was able to win the flyweight title.

Well, despite the fact he lost in a one-sided fight, the classy Benavidez still showed up to speak to the media after Saturday’s event. While talking about his future, the former Team Alpha Male fighter made it clear he’s not ready to retire, under these circumstances (quotes via MMA Junkie).

“I knew last fight was my last title attempt,” Benavidez said. “It wasn’t because of circumstances so this one certainly was.

I wasn’t fighting in this sport from the beginning for any other reason than being the best. I’ve been close. I’ve been lucky.

I’ve been in that top two or three for 11 years at two weight classes. It’s been a crazy journey. It’s been awesome.”

“I’m not going out like that and nothing is guaranteed in this sport for sure, but I’m not going to get another title shot,” Benavidez said.

I’m not going to beat 10 guys again. I know that was my last title shot but like I just said don’t want to go out on that.”

If you’ve followed Benavidez’s career, then his comments above shouldn’t surprise you. The longtime contender has historically been able to point to positives, when he’s incurred defeats.

Further, his determination has never been in question. After Benavidez was KO’d by Demetrious Johnson in 2013, marking the second time he lost to ‘Mighty Mouse’, he climbed back into title contention with a six-fight winning streak. That included defeating now former champ-champ, Henry Cejudo.

Now, is it possible that Benavidez could end up fighting for another belt? In a crazy sport like MMA, never say never.

If Figueiredo were to lose in his first title defense, and Benavidez manages to record several key wins in short in short order, it’s not impossible.

But, considering Benavidez’s age, where he’s at in his career, it’s not surprising he sees the end of his fighting days around the corner.