Jimmie Rivera came up short in his bout with Petr Yan, but the fact the latter's become the new champ has 'El Terror' fired up.

Jimmie Rivera is returning to the Octagon today for the first time since he battled Petr Yan, and the bantamweight’s reminding people of how that fight went, now that Yan is the champ. 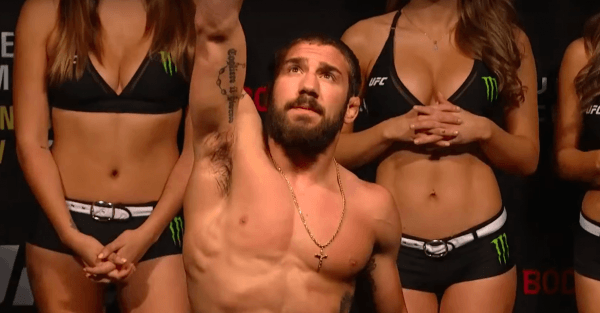 The 31-year-old Rivera is preparing to battle Cody Stamann today at UFC Fight Island 1, which is going down on Yas Island in Abu Dhabi. It will mark the first time Rivera has competed, since he faced Yan at UFC 238 last June, and lost by decision.

Yan, meanwhile, has fought two more times since he defeated Rivera. In December, he took out Urijah Faber and at UFC 251 last weekend, he stopped Jose Aldo to win the vacant bantamweight crown.

Well, in advance of today’s fight, Rivera was asked if Yan’s title is motivating for him, and the New Jersey fighter acknowledged it does (quotes via MMA Junkie).

“Yeah it does,” Rivera said. “I feel like people say different things, but I think I gave Yan his toughest fight and just the fact that I knew I was up in the first and second round, and I wanted to coast, was a hard lesson learned.

“It’s definitely a big motivation to get back in there and just to fight and obviously taking a fight last minute to fill up a spot and help the UFC out.

So I’m looking forward to it, just getting back in and grateful that the UFC gave me this opportunity.”

Now, if you need a refresher, River actually outstruck Yan by a 76 to 58 margin in their bout. But, Yan scored two knockdowns as well as takedown in the fight.

Rivera’s bout with Yan aside, his match-up today with Stamann is a pivotal one. Since Rivera won his first five, UFC bouts, he’s dropped three of his last four.

It should be noted, however, that his defeats have come against top tier competition in Marlon Moraes, Aljamain Sterling and the aforementioned Yan.

“I want to say I should do really well in this fight,” Rivera said. “I’m just looking to put on a war and put on a fight for the fans, to be honest.

My only worry in the outcome is getting my hand raised, getting the W at the end, but obviously (I’m) always hoping to get the finish.”

It’s an interesting fight, and it has the potential to be a really entertaining one, no question. Stamann is coming off  a decision win over Brian Kelleher last month and is undefeated in three straight.