Hollywood has "cancelled" an episode of "The Golden Girls" over mud masks, yet Jimmy Kimmel has yet to be cancelled for wearing blackface.

Streaming service Hulu pulled an episode of “Golden Girls” last month over concerns about blackface since the main characters are wearing mud masks on their faces. The so-called “woke” world of Hollywood continues to pick and choose which blackface scandals are “cancellable.” Despite his own history of wearing blackface, late night talk show host Jimmy Kimmel has yet to be fired.

In the episode, Dorothy’s son Michael is bringing his black fiancee Lorraine home to meet his mother and her roommates.

Hulu removed this episode of Golden Girls because they wore mud masks. Are we really that thin-skinned we get offended so easily? It's a shame. pic.twitter.com/wDQUbHY4UJ

Dorothy (Bea Arthur) is worried about Michael marrying this woman because of her age. But, Lorraine’s family has reservations about her marrying a white man.

In the scene that caused the episode to be “cancelled” by 2020 standards, Rose (Betty White) and Blanche (Rue McClanahan) are wearing matching brown mud masks when Lorraine’s family arrives to meet them.

“This is mud on our faces, we’re not really Black,” Rose can be heard saying, making it clear that it is not blackface at all. Despite this, Hulu still decided to remove the episode.

The decision to remove the episode has been widely panned, particularly by black public figures who think that this move was taking things way too far.

Removing this episode is weird, counterproductive and stupid. It diminishes the effort to actually end racism. It’s just so dumb.

First of all, they were in mud masks not blackface. And second of all, in what world does "Stop killing us." sound like "Please remove episodes of Golden Girls"? I didn't see that ask on anyone's protest sign… https://t.co/cgEcGdD60o

“To be clear: I’m not ‘attacking’ Hulu. I would just hate for the seriousness of this moment and movement to get lost in symbolic (and sometimes silly) overcorrections,” she later added. “Impact on real lives should be the measure of any change worthy of a PR push.”

While “The Golden Girls” was just canceled for mud masks,  Jimmy Kimmel has yet to face any repercussions whatsoever for his blackface past.

In fact, it appears the so-called “woke” late night host got a pass from cancel culture. Despite blatantly wearing blackface on numerous occasions.

During his time on “The Man Show”, Kimmel wore blackface to portray and mock famous black figures like NBA star Karl Malone and even talk show host Oprah Winfrey.

RELATED: Jimmy Kimmel Announces A Hiatus After Blackface Scandal Comes Back To Haunt Him

Jimmy Kimmel in Blackface.
This is hard to find on YouTube even if you type word for word the title of the video, i had to go back to History to find the video I just stumbled upon.
Retweet and make this go viral for some accountability.#BLM #BlackFaceKimmel pic.twitter.com/q1thT4LLCw

Kimmel refused to address the controversy for years. Then he finally offered up a weak apology for his history of racism last month.

Of course, his belated apology came hot on the heels of an announcement that he’d be taking a summer hiatus from his late night talk show.

ABC has given no indication that Kimmel will not be returning to the show at the conclusion of his “summer break,” which he claimed had nothing to do with his blackface scandal.

Jimmy Kimmel Isn’t The Only Celebrity To Wear Blackface

Of course, Jimmy Kimmel isn’t the only liberal celebrity guilty of donning ‘blackface’ during his career. He’s joined by some of biggest names in Hollywood. 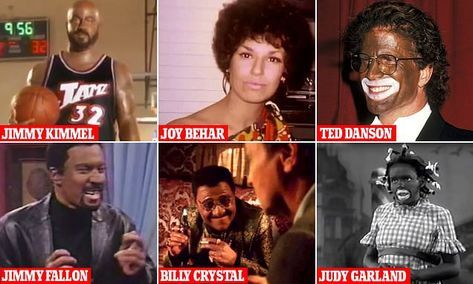 Kimmel routinely uses his platform to blast Donald Trump and his supporters. Of course, radically liberal personalities like him never have to worry about being “cancelled” by Hollywood. Regardless of what skeletons come out of their closets.

But this pass does not extend to the iconic stars of “The Golden Girls”. These household darlings can be cancelled in a heartbeat just for wearing mud masks.

It clear that the hypocrisy of liberal Hollywood is not just alive and well but thriving.

What is the world coming to?

Joy Behar Shares Details About Her 1979 Brush With Death

by Josh Berger
Bounding Into Sports