Derek Brunson: Edmen Shahbazyan is in For a “Step-up in Competition”

Edmen Shahbazyan has gone undefeated to date, but Derek Brunson says the rising middleweight has never faced anyone like him yet.

Much of the spotlight for UFC Vegas 5 seems to be shining right on Edmen Shahbazyan. But, the man who will face him in the headliner, Derek Brunson, doesn’t sound fazed by all the hype. 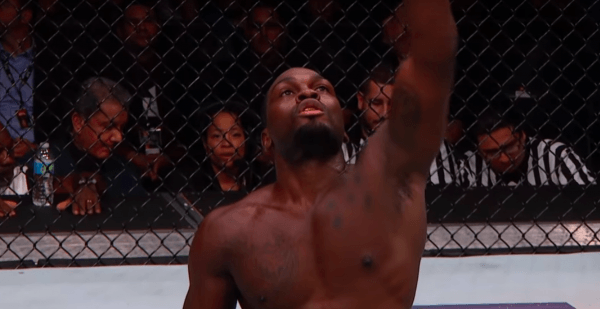 There is plenty of buzz these days regarding Shahbazyan, on account of the fact he’s won all 11 of his pro bouts to date, and his knockout win over Brad Tavares in November. Not only that, but the Armenian-American fighter is also only 22 years-old.

As a a result, the rising fighter’s been tapped to fight the veteran contender Brunson in Saturday’s main event. But, while talking about all the coverage and praise Shahbazyan has been receiving, the heavy-handed wrestler said he’s fine with it (quotes via MMA Junkie).

I’m not really concerned with the person across from me, if they’re getting hype or if the media is focused on them. I know what my job is ultimately, and I’m here to win and make a statement.”

“Definitely a step up in competition (for him),” Brunson said. “He did what he was supposed to do. He beat the guys that were across from him and won his first couple fights, and now here’s his test. …

I’ve had fights where I’ve had finishes, so now it’s just all about putting it together and doing what I do.”

“That stuff doesn’t bother me,” Brunson said. “My job is to go out and get the win by any means (necessary), so that’s what I’m focused on.”

Is Brunson a bigger test?

When you consider who Brunson has fought in his career, chances are he really isn’t fazed by Shahbazyan’s hype. After all, Brunson fought Israel Adesanya as he climbed the middleweight ranks, and there was a massive hype train behind ‘The Last Stylebender’ at the time.

And as far as being a step-up in competition for the 22-year-old? It’s hard to argue with that.

While Shahbazyan has defeated some tough, talented fighters, styles make fights, and he hasn’t faced anyone like Brunson in the UFC. Someone who has explosive power as well as top-tier wrestling.