Dan Hooker Raises His “Hand up” to Fight Tony Ferguson

Dan Hooker recently outlined why he doesn't see Dustin Poirier fighting in the near future, and as a result, he's volunteering to battle Tony Ferguson.

Recently there’s been a fair bit of buzz about the prospect of Dustin Poirier and Tony Ferguson fighting next. But, the way Dan Hooker sees it, Poirier isn’t going to be fighting anytime, too soon.

As a result, ‘The Hangman’ has started pushing for a fight with ‘El Cucuy’. 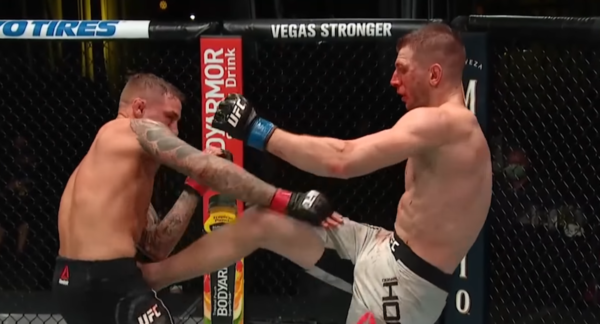 Poirier and Hooker battled in the headliner of UFC Vegas 4 last weekend, and the lightweight contenders went to war for 25 minutes. Since Poirier emerged from the fight with the decision win, there’s been widespread talk about him fighting Ferguson next.

The key reason being that Ferguson is currently ranked #3 in the UFC’s lightweight division and Poirier is #2. Further, the champ Khabib Nurmagomedov, who submitted Poirier last September, is expected to face interim champ Justin Gaethje next.

Well, recently Hooker spoke with MMA Fighting, and the New Zealand fighter weighed in on his next bout. While doing so, Hooker relayed that he doesn’t believe Poirier is going to sign-up for any bout, until after Khabib and Gaethje fight.

“What makes the most sense for both me and Dustin is Dustin fights Tony [Ferguson] to see who’s going to be the No. 1 contender and I go back and fight Charles Oliveira to really solidify myself in the top five by beating another top guy. I understand that.”

Well then obviously Gaethje would love to avenge his loss to Poirier. So I don’t think we see Poirier get back in there and mix it up until that Gaethje-Khabib fight is out of the way.

In terms of Hooker’s prediction regarding Poirier waiting on the sidelines, he very well could be right. As he noted, Poirier holds a win over Gaethje, so if the latter wins the lightweight crown he might call out Poirier.

So, if Poirier informs the UFC that he plans to wait out, and the promotion tables Ferguson – Hooker, it could happen. On paper, it’s certainly a fight with a lot of promise.

The question is, however, does Poirier want to risk being leaped over for a title shot? What if the UFC makes it clear they want to get Ferguson back in the cage, for a bout with either Poirier or Hooker?

Is ‘The Diamond’ willing to sit out, and risk, say, Ferguson getting back into the win column? What if Khabib beats Justin? Could the UFC look at rebooking Nurmagomedov – Ferguson once again?

And what if Conor McGregor returns? And say, Gaethje beats Khabib, and the UFC wants to have the ‘Notorious’ one fight the new champ?