It remains to be seen how Alexander Gustafsson looks in his his heavyweight debut. But 'The Mauler' says he's feeling better than even at his new weight.

When it as announced that Alexander Gustafsson was going to fight Fabricio Werdum at UFC Fight Island 3, the consensus seemed to be it would be a one-off fight for ‘The Mauler’ at heavyweight. But, as the fight nears, it certainly sounds like the longtime, light-heavyweight contender has big plans for the heavyweight division. 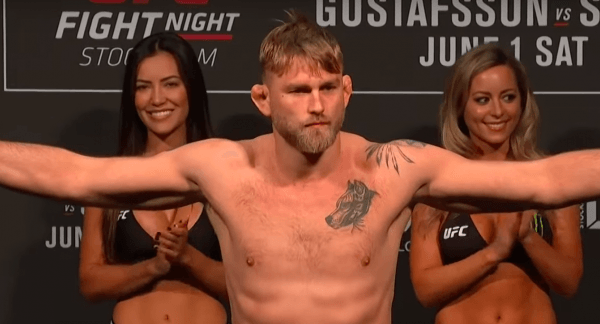 The 33-year-old Gustafsson is returning to the Octagon on Saturday, for the first time since last June, when he was submitted by Anthony Smith. After the bout the fighter announced he was retiring.

But, it wasn’t long before Gustafsson relayed he was getting the itch to fight again. So, when it was announced he was in fact, returning to the cage the news wasn’t shocking.

What was somewhat surprising, however, was the fact he had signed up to fight Werdum at heavyweight. Since Gustafsson was coming out of retirement, and because of how COVID-19 has impacted many training camps, speculation was that ‘The Mauler’ would return to light-heavyweight afterward.

Well, more recently, Gustafsson has said he’s just taking one fight at a time, while discussing his future. But, increasingly it sounds like he has designs on making a title run at heavyweight (quotes via MMA Junkie).

“My speed (will be key),” Gustafsson said. “I basically took everything from the light heavyweight division to heavyweight now, and I feel so much stronger.

I perform better now than I did as a light heavyweight in my training camps so I feel strong, I feel fast, I’m ready.

“I want to be active. I’m here to stay, I’m not going anywhere so let’s see what happens.”

It will be really interesting to see how Gustafsson performs on Saturday, and whether he can defeat the former heavyweight champ. If he can, then a top 10 ranked heavyweight could be next for Gustafsson.

If he wins that fight, then a title shot could be not far out. First things first, however, and that’s defeating the always dangerous, ‘Vai Cavalo’.

Leading up to UFC Fight Island 3, Werdum apparently claimed that he bested Gustafsson, when they sparred back in 2012. But, according to the latter, Werdum has got it twisted.

“We had a good sparring,” Gustafsson said. “I went all in, him and me and it was a good sparring. I don’t remember who I was fighting back then, but I was in camp, he was in camp for a fight, but make history short,

I beat him in that sparring session. I beat him bad…then he didn’t want to spar me no more.”

It should be noted that Gustafsson rightly pointed out that was a long time ago, and that a lot has changed.

UFC Fight Island 3 will be hosted by Yas Island in Abu Dhabi.